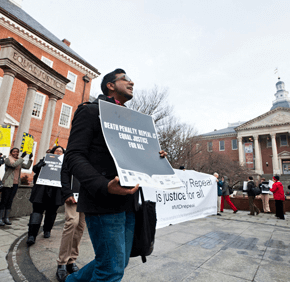 By Maria Wiering
mwiering@CatholicReview.org
Twitter: @ReviewWiering
UPDATED: 5:57 p.m. March 15, 2013: ANNAPOLIS – The Maryland House of Delegates passed legislation to repeal the state’s death penalty March 15, an act the Maryland Catholic Conference (MCC) called “a historic moment.”
The MCC advocates for public policy measures on behalf of the state’s bishops, longtime supporters of death penalty repeal.
The House passed the bill with a vote of 82 to 56. The Senate had passed the bill in February. The bill now goes to Gov. Martin J. O’Malley, who has promised to sign it into law.
“I applaud the Maryland General Assembly for choosing to meet evil not with evil, but with a justice worthy of our best nature as human beings,” Archbishop Lori said in a statement.
Mary Ellen Russell, MCC executive director, said in a statement her organization is “grateful to the many members of the General Assembly who considered this issue with great deliberation over the last two weeks, and who followed their conscience in supporting repeal and the value of all human life.”
The MCC is a partner organization of Maryland Citizens Against State Executions (CASE), which has led advocacy efforts against capital punishment in Maryland. Maryland is the 18th state to repeal the death penalty, and the first state under the Mason-Dixon Line to do so.
During floor discussion before the vote, Del. William J. Frank told lawmakers that he had been a longtime supporter of the death penalty, but changed his mind because of the influence of the Catholic Church.
A Baltimore County Republican and a Catholic, Frank was a member of the Maryland Commission on Capital Punishment, which recommended death penalty repeal in 2009 to the Legislature. He stood with the minority vote.
Also on the commission was Baltimore Auxiliary Bishop Denis J. Madden, a repeal advocate whom Frank said influenced his decision to change his mind.
His newfound position on the death penalty is part of his pro-life view, he said.
“The most important and compelling issue for me is to view the issue from a consistently pro-life perspective,” he said. “Those five men on death row, the worst of the worst, are, believe it or not, created in the image and likeness of God.”
Bishop Madden praised Frank’s about-face, and said he was pleased with the vote outcome. The state’s bishops have worked for repeal for 25 years, he said.
“It’s very much needed, and I think it will lift the state,” he said of the passed legislation. “I would hope that more states would undertake this.”
During a press conference after the vote,  O’Malley, NAACP President Benjamin Jealous and CASE Executive Director Jane Henderson applauded the Catholic Church for its role in death penalty repeal.
MCC Chairman Archbishop Lori testified before the House and Senate in support of the measure in February.
“As people of faith who live in a civilized nation, we recognize that those who have done great harm to others deserve punishment,” Archbishop Lori said in his statement following the vote to repeal the death penalty. “However, we must also recognize that every life has value and that we cannot overcome crime by executing criminals, nor can we restore the lives of the innocent by ending the lives of those convicted of their murders.
“In this week,” Archbishop Lori continued, “when Catholics celebrate the election of our new Holy Father, Pope Francis, so too do we pray that this vote is a step forward in creating a culture that respects the dignity of all human life, in solidarity with the teachings of our Catholic faith and our new Holy Father.”
Copyright (c) March 15, 2013 CatholicReview.org
PrevNext