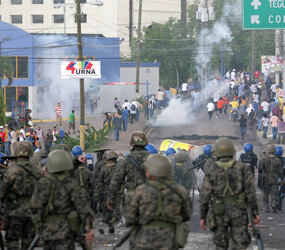 TEGUCIGALPA, Honduras – A Catholic aid official expressed concern about human rights in the country in the wake of a military coup, which he called the expected outcome of a political crisis.

“While we cannot agree with the violent ouster of a government, the threats of the government foretold a violent outcome,” said Pedro Landa, director of Caritas Tegucigalpa, the church’s charitable agency.

Honduran President Manuel Zelaya reportedly had been preparing to suspend the Congress and call a constituent assembly.

“If this is true, then the coup was inevitable,” Landa said June 30, two days after the coup sent Zelaya into exile.

Tensions grew in Honduras when Zelaya called a popular referendum, scheduled for June 28, to consider whether the Honduran Constitution should be amended to allow presidents to run for two consecutive terms. Church authorities had expressed concerns about such a referendum and its real motives.

When the head of the armed forces refused to cooperate in the distribution of the referendum ballots, the president fired him. However, the military arrested Zelaya at his home June 28.

Landa expressed concern about human rights violations since the coup and said absolute censorship keeps church and civil groups in the dark about what is really going on, including pro-Zelaya demonstrations in Tegucigalpa June 29.

“The country is heavily militarized, and there are reports of people imprisoned, detained and even disappeared,” Landa said. “There are also reports of targeted attacks by the military on individuals who reportedly supported Zelaya’s plans.”

Landa said it is currently impossible to verify this information, because the media is “censoring information and publishing only what cannot be hidden.”

He said he feared a violent confrontation in Tegucigalpa July 1 at marches planned by Zelaya supporters and business sector leaders who supported the military coup.

Caritas Tegucigalpa’s director said he believed that Zelaya’s reinstatement – as called for by the United Nations – would not bring about a solution to the crisis.

“We need to go beyond the debate on whether or not what happened was legal. We need a real process of national dialogue and a transformation of Honduras’s obsolete political structures,” he said.