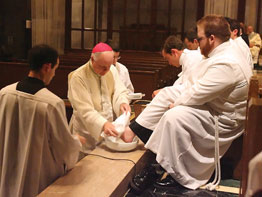 With a simple white apron cinched at his waist, Archbishop Edwin F. O’Brien washed the feet of 12 people during the March 20 Mass of the Lord’s Supper on Holy Thursday at the Cathedral of Mary Our Queen, Homeland. The symbolic gesture – repeated in parishes throughout the archdiocese – was a re-enactment of Christ’s washing of the feet of the 12 apostles at the Last Supper and a reminder that Christians are called to be servants to others.

Holy Thursday is the day Catholics commemorate the Last Supper and the institution of the sacraments of Eucharist and Holy Orders.

In his homily, Archbishop O’Brien said priestly ministry has been “forever identified” with the eucharistic breaking of the bread and that priests are called to follow Christ’s example of selfless service.

“He loves us until the end, and so he has given us a model to follow,” said Archbishop O’Brien. “What he has done for us, so let us do now and always.”

Andrew DeFusco, a seminarian at Mount St. Mary’s in Emmitsburg, was among those whose feet were washed by the archbishop. He was touched by the symbolism of the act.

“You realize this is what we’re called to do as Christians every day with the sacrament of penance – we’ve got to let Christ wash what’s dirty in us,” said Mr. DeFusco. “Only then will we be cleansed and cured.”

The liturgy encapsulated what he is supposed to be about as a future priest, Mr. DeFusco said.

“This is what we want to do,” he said. “We want to serve, too. We see that our own cleansing and our own fulfillment is in loving others and being Christ to others.”