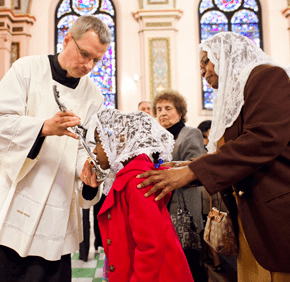 By Elizabeth Lowe
elowe@CatholicReview.org
Twitter: @ReviewLowe
Zbigniew Jamroz could not hide his excitement as he explained how happy he was to help welcome a first-class relic of Blessed Pope John Paul II to Holy Rosary Church in Fells Point April 7.
“John Paul II, he was my idol,” said Jamroz, 63, a Holy Rosary parishioner, usher and parish finance committee member. “I’m always asking for prayers (from John Paul II).”
Jamroz, a native of Poland, was among the hundreds who packed the Polish parish for the Divine Mercy Sunday Mass, celebrated primarily in English.
Baltimore Archbishop William E. Lori, the principal celebrant, welcomed a relic of Pope John Paul II – a drop of his blood.
To view a slideshow of the event, navigate the arrows below.
Society of Christ Father Andrzej Totzke, pastor of Holy Rosary and a concelebrant in the liturgy, previously told the Catholic Review parish leaders wrote to Krakow Cardinal Stanislaw Dziwisz, the pope’s former priest-secretary, requesting a relic of Pope John Paul II last year. Cardinal Dziwisz sent a drop of the late pontiff’s blood.
Holy Rosary parishioner Christine Grabowski called the relic “another piece of the puzzle to make this the (archdiocesan) Divine Mercy Shrine. This is a vital, vital church.”
In his homily, Archbishop Lori spoke about forgiveness and God’s mercy.
“… The resurrection completely changed the meaning of the nail prints in the body of Christ,” Archbishop Lori said. “What once were wounds unto death have become permanent testimonies of the love of God, stronger than sin and that mercy, mercy is victorious over the grave and indeed over every form of darkness. These wounds can no longer kill our Lord. Now they proclaim to us that his love and his mercy are victorious over absolutely everything.”
He continued, “In his first Angelus message, Pope Francis said so beautifully these words: he said ‘let us not forget God never tires of forgiving us. The problem is that we ourselves tire. …We grow weary of asking for forgiveness. Let us never tire, let us never tire,’ he says, ‘he is the loving Father who always pardons’ …”
Carole Nadeau, a Holy Rosary parishioner, said she “was pleased he (the archbishop) spoke of Pope Francis’ plea to us to find more forgiveness for others. Lately, all of us in the whole world have become unforgiving.”
During the Divine Mercy liturgy there was exposition of the Blessed Sacrament as the faithful chanted the Chaplet of the Divine Mercy, a eucharistic procession and veneration of the relic of Blessed John Paul II. The faithful waited in line for confession.
Holy Rosary has a special connection to St. Faustina Kowalska, a 20th century Polish nun who had a vision of Jesus in which he asked for devotions to divine mercy.
Father Ronald Pytel, a former Holy Rosary pastor, was cured of congestive heart failure after prayers were offered to the Polish nun for her intercession on the priest’s behalf. Father Pytel’s unexplained recovery in 1995 was the second miracle needed for St. Faustina’s canonization.
Where the prayers were offered at Holy Rosary is now the archdiocesan Shrine of the Divine Mercy.
Pope John Paul II established Divine Mercy Sunday in 2000 as a feast celebrated on the second Sunday of Easter. He announced the new feast the same day he canonized St. Faustina.
Copyright (c) April 8, 2013 CatholicReview.org
PrevNext