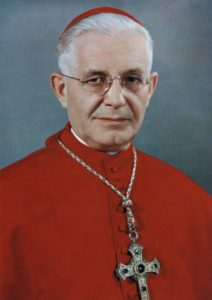 He was born on December 18, 1898 in Baltimore and studied at St. Charles College, Catonsville, Maryland, St. Mary’s Seminary, Baltimore, and at the Pontifical North American College, Rome, where he was ordained a priest on December 23, 1922. He completed his doctoral studies in theology the following year at the Urbaniana University in Rome, and returned as curate in St. Patrick Church, Washington, D.C. Shehan was involved in pastoral work from 1923-47. He also served as assistant director of Catholic Charities fro 1929-36, and director from 1936-45. He was appointed auxiliary bishop to the archbishop of Baltimore and Washington in 1945 and, in 1947, auxiliary to the archbishop of Baltimore, and served as vicar general from 1948 until his translation to the newly erected Diocese of Bridgeport, Connecticut, in 1953.