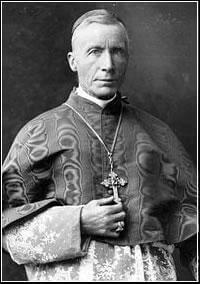 James Gibbons was born in Baltimore on July 23, 1834, the son of Thomas Gibbons, a clerk, and Bridget Walsh Gibbons. He was baptized in the cathedral from which he would be buried.

Gibbons’ parents had come to the United States about 1829 but returned to Ireland in 1837. There his father ran a grocery in Ballinrobe, County Mayo, until his death in 1847. The widow and children returned to the United States in 1853, establishing their residence in New Orleans. There James worked in a grocery store until inspired by a Redemptorist retreat to become a priest. In 1855 he entered St. Charles College, the minor seminary in Baltimore, and in 1857 St. Mary’s, the major seminary. On June 30, 1861, he was ordained by Archbishop Francis Patrick Kenrick of Baltimore, who had accepted him for his archdiocese. For six weeks Gibbons was assistant at St. Patrick’s parish, then appointed first pastor of St. Bridget’s, originally a mission of St. Patrick’s. There he served as a chaplain for Fort McHenry during the Civil War.

In 1865 Archbishop Martin John Spalding summoned Gibbons to be his secretary and help prepare for the Second Plenary Council of Baltimore. At the council the assembled fathers,