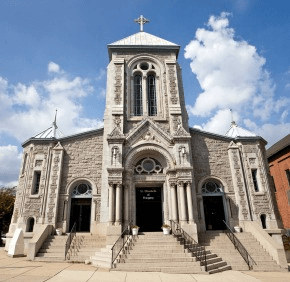 By Maria Wiering
mwiering@CatholicReview.org
Franciscan Friars of the Third Order Regular will turn over responsibility for St. Elizabeth of Hungary in Highlandtown to Conventual Franciscans following weekend Masses Sept. 13-14.
Third Order Regular (TOR) Franciscans have served the 119-year-old parish since 1998. Baltimore Archbishop William E. Lori announced the transition to parishioners in an Aug. 16 letter.
“Given the order’s current limited number of friars, the provincial council determined that their limited resources could no longer support their ministry here,” he wrote.
TOR Father Kraeger, St. Elizabeth’s administrator since 2012, said he is ready to “step down,” noting that his health “isn’t the best.”
The 73-year-old plans to semi-retire in Loretto, Pa., home to his order’s local province. TOR Father Robert Sisk, St. Elizabeth’s pastor emeritus, also plans to leave the parish’s friary.
“The archdiocese has been blessed with many years of humble and loving service by the TOR friars here in Baltimore City,” Archbishop Lori wrote. “Their dedication to the people of God in the area in which they served, and the ways in which they mirrored Christ in true Franciscan tradition, will be missed dearly.”
The order also serves the East Baltimore twin parishes of St. Ann and St. Wenceslaus.
Both TOR and Conventual Franciscans trace their orders to St. Francis of Assisi, who founded several religious orders for men and women in 13th century Italy.
The Conventual Franciscans, officially the Order of Friars Minor Conventual, have assigned Father David Kashen to St. Elizabeth. A native of Rosedale, he served St. Edward the Confessor in Stafford Springs, Conn., for five years prior to his new assignment. He is expected to celebrate weekend Masses at St. Elizabeth Sept. 20-21.
The Conventual Franciscans’ local province is based in Ellicott City, also home to their Shrine of St. Anthony. In Baltimore, the order serves Annunciation, St. Casimir and St. Clement Mary Hofbauer parishes and Archbishop Curley High School.
Prior to 1998, St. Elizabeth was staffed by priests of the Archdiocese of Baltimore. About 100 people attend the parish’s weekend Masses, Father Kraeger said, but it has recently begun to draw young families. It sits on the north border of Patterson Park in East Baltimore.
“I hope that the transition for the parish will be rather easy because another Franciscan community will be assuming leadership,” Conventual Franciscan Father Richard-Jacob Forcier, province secretary, told the Catholic Review by e-mail.
“Certainly our community has no plan for change, that should rise from the community in place – the parish council in tandem with the pastor,” he added. “We are just happy to increase our ministry here in the archdiocese.”
Bishop Denis J. Madden, auxiliary bishop of Baltimore, will celebrate a farewell Mass for the TOR friars Sept. 13 at 4 p.m., followed by a reception.
Also see:
A swamped boat, a Baltimore ‘quirk’ and $700,000: Seven things you need to know about the 2014 Dragon Boat races
A model that works: Sisters Academy celebrates 10 years
PrevNext