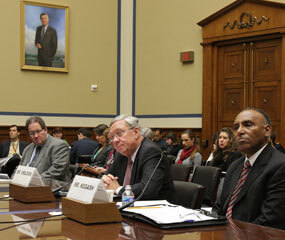 WASHINGTON – A U.S. Conference of Catholic Bishops program aiding victims of human trafficking was denied funding after its administrators declined to propose alternatives to a government requirement that female victims receive “the full range of legally permissible gynecological and obstetric care,” a Department of Health and Human Services official told a congressional committee.

Under grueling questioning from Republican members of the House Committee on Oversight and Government Reform Dec. 1, George Sheldon, acting assistant secretary of the Administration for Children and Families, said he made the final decision to award grants worth $4.7 million to three other agencies that agreed to provide access to services such as abortion, contraception and sterilization under the National Human Trafficking Victim Assistance Program.

The committee hearing was called as House members investigated why the bishop’s Migration and Refugee Services department was denied funding for its program despite receiving high scores during a review of its application for $2.5 million for another year of work and its positive track record of assisting nearly 2,800 trafficking victims and family members since 2006.

Johnny Young, executive director of the bishops’ Migration and Refugee Services, which contracted with the government to assist trafficking victims, told Catholic News Service that he explained to Sheldon the agency could work with alternatives “but we didn’t offer any alternatives.”

“We just said we wouldn’t do anything that would violate church teaching,” Young said.

Several Republican committee members charged during the three-hour hearing that the final decision to deny funding to MRS demonstrated an anti-Catholic bias within the administration of President Barack Obama.

They also accused HHS of including the new policy in the program so that religious organizations and individuals with a moral objection to abortion, contraception and sterilization would be disqualified in the end.

“I look at this and, you know what, we got gamed on this,” Rep. Mike Kelly, R-Pa., said. “We structured this so tightly, we put language in there that would remove Catholic bishops participating even though they have a great track record, even though they scored so high, even though they outscored other people.”

Sheldon denied the charge, saying that the funding announcement was finalized before he joined HHS in the spring and that HHS attorneys were involved in ensuring that all requirements of the program were legal under federal law.

He also admitted that he did not expect the bishops’ program to offer alternatives that would open the door to allow women trafficking victims to seek services that violate Catholic teaching and pay for such services.

The requirement to provide “the full range of legally permissible gynecological and obstetric care” was not in the earlier five-and-half-year contract HHS had with MRS. It appeared in the new funding announcement from HHS May 27 seeking proposals from agencies interested in serving foreign-born human trafficking victims.

The acting assistant secretary explained in introductory comments that HHS had awarded $650 million to Catholic organizations during the past three years, including a $19 million grant to aid foreign refugees days after the MRS grant was denied.

He also repeatedly denied that an anti-Catholic bias existed within the government agency.

Representatives focused on why the bishops’ highly regarded program was denied funding despite finishing second in scoring after a three-member panel of reviewers graded the MRS proposal.

The top scoring proposal came from Heartland Human Care Services Inc. of Chicago with 90 out of a possible 110 points while the MRS proposal scored 89 points, according to HHS documents made available by the committee.

Two other agencies, Tapestri Inc. of Tucker, Ga., and the U.S. Committee for Refugees and Immigrants of Arlington, Va., known as USCRI, received scores of 74 points and 69 points, respectively, according to the documents. They were eventually funded for one year with Tapestri receiving nearly $1.1 million and USCRI receiving nearly $2.6 million.

Heartland’s grant was worth just more than $1 million.

All three agencies can have the grants renewed for up to an additional two years.

Through agencies in local communities subcontracted by the grantees, the program assists trafficking victims with case management of a variety of social services and health care needs.

Rep. Darrell Issa, R-Calif., committee chairman, quoted unreleased HHS documents that indicated that the proposal from USCRI was not recommended for funding during the review process.

However, Sheldon explained that the scores were just the first step in the proposal review process and that the reviewers had questions about each of the proposals that required additional information before a final decision was made.

He said he contacted each of the four agencies and came to the decision that Heartland, Tapestri and USCRI could meet the full requirements of the program and that MRS could not.

“(Victims) are struggling to restore their trust and their faith and I believe that we need to provide the full array of services so that they have a fighting chance.” Sheldon said. “I’m confident the three grantees will ensure that the victims of human trafficking will receive high quality case management services.”

Democrats on the committee supported Sheldon’s decision, saying it is the responsibility of the agencies receiving government grants to conform to program guidelines rather than seek exceptions from the government.

Rep. Gerald Connolly, D-Va., said he was troubled by the implication that HHS was biased against Catholic agencies, pointing to the millions of dollars the USCCB, Catholic Charities and Catholic Relief Services have received in recent years.

Rep. Chris Smith, R-N.J., also questioned Sheldon on whether the needs of trafficking victims were being met in the interim period between the time the MRS contract ended Oct. 10 and the three other agencies ramped up their programs in various regions of the country.

Sheldon said he believed that victims were continuing to receive services, but could not provide specific details. He offered to send data to the committee in the near future.