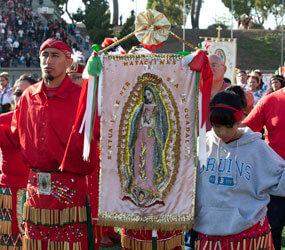 LOS ANGELES – Los Angeles Archbishop Jose H. Gomez Dec. 4 urged a crowd of 25,000 people from throughout the archdiocese to immerse themselves in a deeper conversion and to view and help each other as brothers and sisters of the “familia de Dios” (family of God).

“The beautiful woman of Tepeyac is Jesus’ mother and she is also our mother. She is the mother of the Americas and mother of all the people,” Archbishop Gomez said during his homily at Mass following the 80th annual procession in honor of the Virgin of Guadalupe in East Los Angeles.

“She is the ‘Mother of Our Roots,” he said, translating this year’s theme, “Madre de Nuestras Raices.”

As has been traditional for the past eight decades, parish groups, decorated floats, equestrians and indigenous dancers escorted the image of the Virgin of Guadalupe in a two-mile walk that ended at East Los Angeles College Stadium, where they gathered for the Mass at which Archbishop Gomez presided.

“We are so excited to be here,” said Humberto Turckheim, a parishioner of Precious Blood Church in Los Angeles who was dressed as St. Juan Diego.

Since he was healed from a cerebral hemorrhage that left him bedridden during three months in 1986, he has dedicated his life to Mary, who “saved my life,” said the native Guatemalan.

Next to him, dressed as Our Lady of Guadalupe, was 24-year-old Bereniz Jacinto, also a Precious Blood parishioner. She is a firm believer that Mary as the Virgin of Guadalupe answered her and her family’s petitions when several years ago she fell into a four-year coma after suffering appendicitis.

“She is very real; she really intercedes for us all!” exclaimed Turckheim.

Most of the participants said they were there to pray for peace in Mexico and family union.

“We’re here to support our church, but also to ask the Virgin to bring peace to Mexico, where the situation is getting worse,” said St. Aloysius Gonzaga parishioners Lina Chavez and Magdalena Lopez, while heading to meet a group of folkloric dancers from their church with their 11-year-old daughters.

The women, who were attending the celebration for the first time, told The Tidings, newspaper of the Los Angeles Archdiocese, that they want their daughters to learn the tradition.

“These are my roots and I know these are your roots as well,” he said. “We have to promise to make efforts to lead a good life and help others; we need to strengthen our communities, our parishes, our neighborhoods, our archdiocese through our love for our family and for our church. That is the meaning of being a Guadalupano.”

He prayed for peace, employment and for a solution to the “challenge of immigration.”

Citing the day’s readings from Isaiah and the Gospel, he urged the assembly to listen to God’s voice with an open mind and heart and to start a new life, asking God for the “grace of a new conversion, not only filled with good thoughts and intentions, but with a deep change in our lifestyle, getting rid of self-centeredness and pride.”

He reminded the assembly that the Virgin of Guadalupe was sent by Jesus to let people know that he has a great plan for everyone and used a simple man named Juan Diego who became the first Guadalupano missionary to the new world.

“As he did, God wants us to carry a message of forgiveness and love to the world and mother Mary will help us eliminate violence, poverty, injustice, and find a Christian solution to our American nations.”

At the end of the Mass, the archbishop blessed images of Our Lady of Guadalupe that will be taken to parishes to share Mary’s message of hope with immigrants.

In gratitude for 25 years of service to the Latino community, Cardinal Mahony was presented with a medallion of the Mexico City basilica by the event’s organizing group Guadalupanos Unidos de Los Angeles. Another medallion was presented to Archbishop Gomez in recognition of his new leadership role.