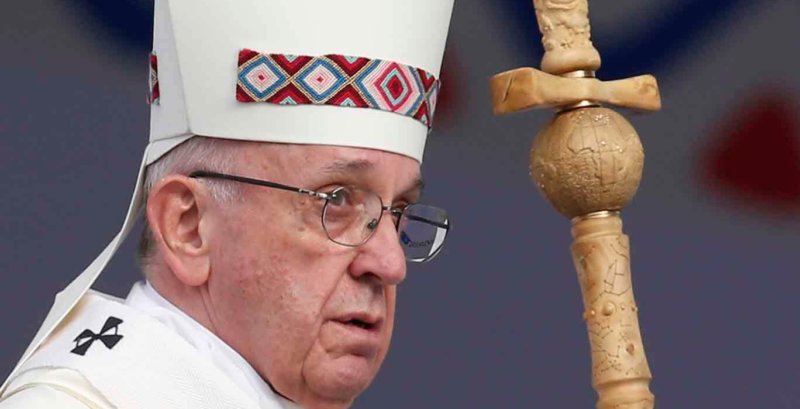 VATICAN CITY — Several dozen priests, scholars and writers have published what they described as a “filial correction” of some of Pope Francis’ teachings about marriage — particularly about access to the sacraments for divorced and civilly remarried Catholics.

The best-known name among the signatories is Bishop Bernard Fellay, superior general of the traditionalist Priestly Society of St. Pius X, a group still involved in talks with the Vatican aimed at regularizing its status within the Catholic Church.

The letter originally was signed by 40 people and delivered to Pope Francis in August; the writers said they did not receive a response, so they released it publicly Sept. 24, launching a website as well: www.correctiofilialis.org.

The Vatican press office had no comment about the letter.

U.S. Cardinal Raymond L. Burke, former head of the Vatican’s top court, and German Cardinal Walter Brandmuller, former president of the Pontifical Committee for Historical Sciences, did not sign the letter. Along with two other cardinals who are now deceased, they publicly released in September 2016 a critical set of questions, known as “dubia,” that they had sent to Pope Francis about his teaching on the family.

As recently as August, Cardinal Burke spoke in an interview about issuing a “formal correction” of Pope Francis if he refused to respond to the “dubia.” The correction, he said, would be a declaration of church teaching, rather than a set of questions.

The new letter accuses Pope Francis of “the propagation of heresies effected by the apostolic exhortation ‘Amoris Laetitia’ and by other words, deeds and omissions of Your Holiness.”

“Amoris Laetitia” (“The Joy of Love”) is the document Pope Francis released in 2016 reflecting on the discussions and conclusions of the meetings in 2014 and 2015 of the Synod of Bishops on the family.

In the document, Pope Francis affirmed church teaching that the sacrament of marriage is the bond of one man and one woman united for life and open to having children.

However, the document also encouraged parishes and priests to reach out to couples whose marriages have failed, reminding them that they have not been excommunicated.

In “Amoris Laetitia,” Pope Francis asked pastors: to accompany those who have remarried civilly; to check if their sacramental marriage was valid or if they could receive a decree of nullity; and to lead them in a process of discernment about their responsibility for the breakup and about their current situation in light of church teaching. The document seemed to open the possibility — in certain cases and after the discernment process — of allowing them to receive absolution and Communion even without promising to abstain from sexual relations with their new partner.

The “filial correction” lists what its authors see as seven “false and heretical propositions” in “Amoris Laetitia,” including: a belief that God’s grace does not give a believer the strength to meet “the objective demands of divine law”; that divorced and civilly remarried persons “are not necessarily in a state of mortal sin”; that a person can break divine law and not be in a state of sin; that a person can decide in good conscience that sexual relations are morally permissible or even good with someone other than the person they married sacramentally; and that “our Lord Jesus Christ wills that the church abandon her perennial discipline of refusing the Eucharist to the divorced and remarried.”

The letter asked the pope to publicly reject the seven propositions.