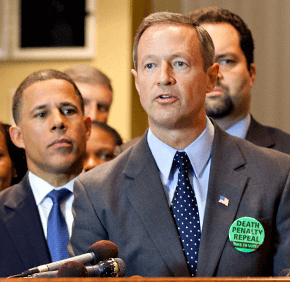 ANNAPOLIS – Gov. Martin J. O’Malley joined leaders from the National Association of the Advancement of Colored People Jan. 15 to rally for repeal of Maryland’s death penalty.

Flanked by NAACP members including CEO and President Benjamin Jealous, Lt. Gov. Anthony G. Brown, state legislators and death penalty repeal advocates, O’Malley said abolishing capital punishment in the state was a just and moral action. He recommended replacing the death penalty with a sentence of life without the possibility of parole.

“We know what works,” he said. “Investing in law enforcement. Investing in data-driven policing. Increasing the availability of drug treatment. Performance measurement. Strengthening partnerships between police and neighbors. Investing in the latest crime fighting technologies, DNA analysis, healing vulnerable families – these are the things that work to reduce violent crime and save lives. The death penalty does not work.”

Ending the death penalty in Maryland would be a step closer to ending it nationwide, Jealous said.

“It is today with a great sense of justice, a great sense of history and a great urgency to improve the safety of our state that we come here to say this is the year that we will end the death penalty in Maryland and replace it with life without the possibility of parole,” he said.

O’Malley said he plans to file legislation this week.

Senate President Thomas V. Mike Miller, who supports the death penalty, has promised to bring the measure to a vote before the whole Senate if O’Malley can show there is widespread support for death penalty repeal.

At the press conference, O’Malley said he is confident both the Senate and the House of Delegates have the votes to pass the measure.

The Maryland Catholic Conference, which advocates for public policy on behalf of the state’s bishops, is a member organization of Maryland Citizens Against State Executions. MCC Executive Director Mary Ellen Russell told the Catholic Review she is heartened that death penalty repeal seems possible with the current Assembly, but that the organization is taking no legislator’s vote for granted.

“One of the differences this year is the vote from the Senate president – that he will allow a vote on the floor,” Russell said.

The state’s bishops view the death penalty as a pro-life issue, Russell said.

“It’s a wonderful opportunity for the church to demonstrate how deep our conviction is, that all life is sacred, even that of a convicted killer,” she said. “With the Catholic Church as a prominent member of this coalition, everyone truly recognizes the authenticity of our position on this issue.”

“I am hopeful that this year may at last offer the chance to end state executions in Maryland once and for all,” Archbishop Lori wrote in the letter, which was copied to Senate President Miller and House Speaker Michael E. Busch.

Archbishop Lori was bishop of Bridgeport, Conn., when the state voted to repeal its state’s death penalty in 2011. Other states to abandon the death penalty in recent years were New York in 2004, New Jersey in 2007, New Mexico in 2009 and Illinois in 2010.

Several speakers at the press conference noted that Jan. 15 was the birthday of Dr. Martin Luther King Jr., whom they believe would have opposed the death penalty because of his love of justice.