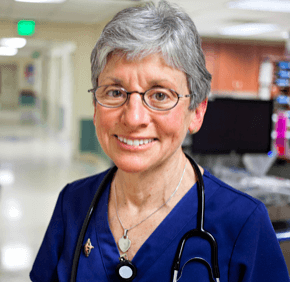 By Jessica Marsala
jmarsala@CatholicReview.org
Jane Oakjones enjoys talking about her family.
She has two sons and three grandchildren, whom she visits in her spare time, but Oakjones, 66, is also referring to the relationships she has built during her 40 years working as a registered nurse at MedStar Good Samaritan Hospital in Baltimore.
“I think of Good Samaritan as my ‘Good Sam’ family,” Oakjones said. “They’ve really been there for me professionally and personally over the years. It’s been a blessing in my life. Everybody is so friendly and concerned about you, like family members.”
Oakjones was one of the very first members of that Good Samaritan network, which last month marked the 45th anniversary of its opening.
In July 1968, just a month after graduating from the old Bon Secours Hospital School of Nursing in Baltimore, Oakjones secured a position at Good Samaritan, which had yet to officially open its doors.
When the hospital was finally ready for business in November of that year, Oakjones admitted one of its first patients, a stroke victim.
“It was just very exciting,” she said. “I just felt so proud to be a part of the roots of the hospital itself. I feel like part of the woodwork.”
Like any family, Oakjones credits Good Samaritan with teaching her many lessons, and with being there for her in the best and worst of times.
“I came here (Good Samaritan) because I was uncomfortable taking care of stroke patients, so the best way to overcome fears is to learn more about it,” Oakjones said. “I got to practice what I had learned, and I got to practice everything that we had been working on.”
She left Good Samaritan for five years to start a family with the late Donald Oakjones, a former Baltimore police sergeant and teacher at Archbishop Curley High School, but always felt a pull back.
“When I was doing private duty at different hospitals around the area I got to see how they operated,” said Oakjones, an alumna of The Catholic High of Baltimore who worships at St. Michael the Archangel, Overlea. “I thought Good Samaritan was the best. It was like home.”
She has seen the hospital grow and change, in mission and appearance.
Nurses left behind their traditional uniforms of all-white dresses and caps, and the institution its reputation as primarily a rehabilitation hospital. Oakjones has witnessed Good Samaritan gain an emergency room, cardiac and dialysis units, new medical equipment and electronic documentation, among other things.
Now working part time, Oakjones does not anticipate leaving her professional home anytime soon. When she does retire, which Oakjones will do “when the spirit moves” her, she will likely continue volunteering at her parish with programs such as the Helping Hands Committee, which she once coordinated.
For now, Oakjones says she “loves” working in the Comprehensive Inpatient Rehabilitation Unit because she enjoys “seeing patients improve and get to the point where they are as independent as they can possibly be.”
Even when patients are struggling or do not improve as much as would be desired, Oakjones just lends her ear or asks if they would like to pray with her.
“It’s a matter of taking care of body, mind and spirit,” she said, “not just the disease entity.”
Also see:
All I want for Christmas: Top gift suggestions for teachers (and best gifts they have received)
Hunger awareness campaign launches: Archbishop spends snowy Tuesday at Our Daily Bread
PrevNext