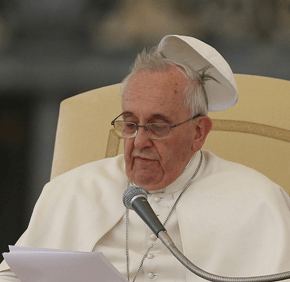 By Cindy Wooden
Catholic News Service
VATICAN CITY – If you haven’t been to confession recently, don’t wait, Pope Francis told people at his weekly general audience. One may walk into the confessional with a heavy heart, but forgiveness brings freedom and lightness.
“If a lot of time has passed, don’t lose even one more day. Go,” the pope said Feb. 19, promising that “the priest will be good. Jesus will be there and he’s even nicer than the priest.”
“Be courageous. Go to confession,” the pope told an estimated 20,000 people at his weekly general audience in St. Peter’s Square.
“Even just on a human level in order to vent, it’s good to speak to a brother, confessing to the priest these things that weigh so heavily on your heart,” the pope said. “Don’t be afraid of confession.”
Watch a video of Pope Francis encouraging pilgrims to go to confession.

Pope Francis said he wanted to follow up on his previous audience talks about baptism, Communion and confirmation.
Those sacraments give new life, he said, but sin eats away at that new life and can destroy it, which is why Jesus gave his disciples the power to forgive sins in the name of God and the Christian community.
“Some say, ‘I confess only to God.’ Yes, you can say, ‘God forgive me,’ but our sins are also against our brothers and sisters, against the church,” which is called to be holy, he said. “This is why it is necessary to ask forgiveness from our brothers and sisters and from the church in the person of the priest.”
Pope Francis said he knows some might say to him, “‘but, Father, I’m ashamed.’ Shame is good, it’s healthy to have a bit of shame,” because “shame makes us more humble.”
“Sometimes when you’re in line for confession, you feel all sorts of things, especially shame, but when your confession is over, you’ll leave free, great, beautiful, forgiven, clean, happy — this is what’s beautiful about confession,” he said.
The pope asked people at the audience to think about how long it’s been since they have been to confession. “Don’t say it out loud, OK? but respond in your heart: When was the last time you confessed. Two days? Two weeks? Two years? Twenty years? Forty years?”
Citing the “beautiful, beautiful” Gospel story of the Prodigal Son who returned home after squandering his father’s inheritance, Pope Francis said the father didn’t even wait for the son to finish asking forgiveness. “He hugged him, kissed him and threw a party.”
“I tell you,” the pope said, “every time we go to confession, God embraces us and celebrates.”
– – –
The text of the pope’s audience remarks in English is available online here.
The text of the pope’s audience remarks in Spanish is available online here.
See also:
Facing the truth about ourselves is a step toward holiness, pope says
Thumbnail bios of the men who will become cardinals Feb. 22
Copyright (c) 2014 Catholic News Service/U.S. Conference of Catholic Bishops
PrevNext