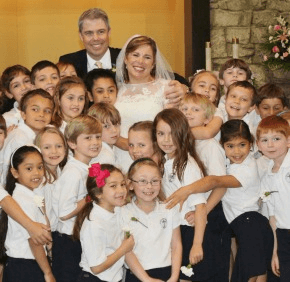 ATLANTA – When Beth Anne Ross was recently united in the sacrament of marriage with William Dempsey III at the morning Mass for students of St. Jude the Apostle School, her second-grade students were right with her.
The wedding was the first in the school community’s history.
A second-grade teacher at St. Jude, the bride provided white carnations for her students to pin to their school uniforms. Her class, who had prime seats at the front of St. Jude Church, bobbed up and down for a glimpse of their teacher as she walked down the aisle in a tea-length wedding gown.
Monsignor Joe Corbett, pastor, celebrated the Mass, which was attended by the entire student body, as well as the couple’s friends and family members.
“Class, today we’re going to talk about marriage,” Monsignor Corbett said.
“We are delighted to be able to share in their happiness today,” he added.
The pastor told the couple, who have been longtime friends and running and hiking partners, “The day you met for the first time marked a new beginning in your life.” The wedding itself, he said, is a “new life in Christ.”
“Your wedding lasts only for the next two hours, but your marriage is for the rest of your life,” he said.
The celebrant asked the guests to do something for the couple.
“During their ceremony they would like for you to say a little prayer, asking God to bless them this day and all the days of their married life.”
In a light moment, he asked the second-graders who is boss of the classroom. They shouted “Ms. Ross” in unison. After the wedding, who will be the boss at her house, he queried. “Mrs. Dempsey,” they replied.
The wedding Mass was a school-wide effort. Principal Patty Childs, who led the prayer of the faithful, had made the off-hand suggestion that the couple marry at a school Mass. The bride-to-be thought about it and decided it was a great idea.
“We’re all about the sacraments,” Childs said.
Most of the bride’s students have been preparing to receive first Communion and first reconciliation this spring, and she didn’t want to be left out of the special sacramental year. The school practice is for “Spiritual Life” mothers to come and teach the children about the sacraments.
Prior to the wedding, matrimony was the students’ focus and they had a surprise bridal shower for their teacher. The mothers put together a scrapbook of all the happenings.
The bride and groom ordered 708 cupcakes, topped with white frosting, for the children to enjoy after the wedding Mass. Fellow teachers spent two months embossing 1,200 napkins for the cupcake party. Each child was also given a keepsake program.
The second-grade students posed for official wedding photos in the sanctuary with the newlyweds.
Ross and Dempsey had known each other for several years, meeting through mutual friends and often attending the same retreats, service days and social events. They developed a friendship, meeting each Wednesday to go running and share life’s happenings. They began spending more time hiking with Ross’ dog, Gus, and dining together. He became a fixture at the school and its events.
After many months, they both realized that a deepening friendship was love.
“Suddenly it hit me that Beth was my best friend and, from that, something else developed,” wrote the groom in recalling their story.
After Dempsey proposed, Ross shared the occasion with her students in a video.
“He did it in a creative way,” said student Caroline Callahan approvingly.
Ross created special invitations for the children with lots of “bling.”
“We were really excited. Everyone thought it was a joke,” said student Joseph Iannucci about the April Fools’ Day wedding date.
Monsignor Corbett said in his homily “marriage really is a school of love,” explaining that it is the sacramental way to love each other more deeply.
Flannery Hipp, 8, one of the bride’s students knows that to be true.
“When you’re married, you love each other more than before.”

A little bit country: Pope looks at the nitty gritty of family life