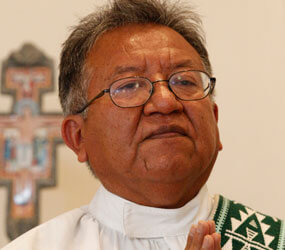 GALLUP, N.M. – Bishop James S. Wall of Gallup and the clergy, religious and parish communities in the diocese mourned the death of Deacon Marcellino Morris Jr., who was killed in a head-on auto accident Dec. 30.

A rosary was held Jan. 8 at St. Mary Church in Tohatchi, on the Navajo reservation, where Deacon Morris served.

Deacon Morris, who was Navajo, was ordained at Sacred Heart Cathedral in 2001. Since that time, he had ministered at St. Mary as well as at its mission church, St. Anthony in Naschitti, and served the Catholic community in Coyote Canyon.

A visitation was held at Sacred Heart Cathedral Jan. 9 with words of remembrance recited in English and Navajo. Afterward, Bishop Wall celebrated the funeral Mass for the deacon. Interment was at Naschitti Community Cemetery.

Deacon Morris, who lived in Naschitti, was recently featured in an article by Catholic News Service, where he talked about his vocation and joy he found serving in the diaconate for the Gallup Diocese.

He said he chose the diaconate because he felt called to serve the tribal elders by being able to read the Gospel and preach in the Navajo language at Mass.

But ordination wasn’t on his mind when, years ago, he decided to get more involved in the church in which he was raised and enrolled in a Jesuit-run program for Native Americans called “Builders of the New Earth” to refresh his knowledge about the Catholic faith.

“It really enlightened me more about the church, the faith that we have and also made me appreciate our cultural values more (as a Navajo),” he told CNS in an interview last October.
During the course, a nun told him he’d make a good deacon. “I kind of shrugged it off,” he said, but later thought maybe someday he would take that path but he’d choose “the timing.”

Then, on a visit to Albuquerque, he attended a Mass he didn’t expect to be celebrated only in Spanish, a language he didn’t speak.

He entered Gallup’s diaconate program and was ordained June 2, 2001.

“I feel like I was called to minister to the elders of my people who do not speak English. … The sadness of this ministry is that a lot of them have passed on (but) I feel like they were able to be ministered to more effectively by the use of their language, and I am really grateful for that.”