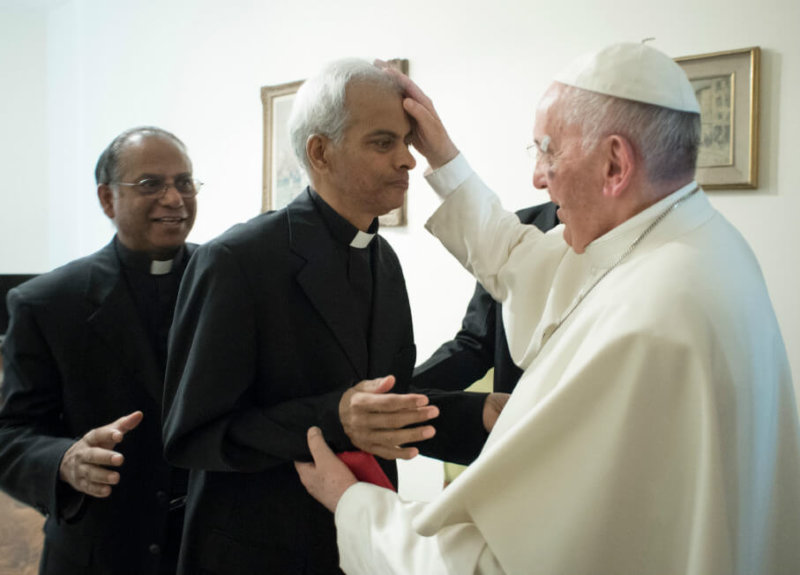 Salesian Father Tom Uzhunnalil, who was released Sept. 12 after having been kidnapped 18 months ago in Yemen, is anointed by Pope Francis during a Sept. 13 meeting at the Vatican. (CNS photo/L'Osservatore Romano)

According to the Vatican newspaper, L’Osservatore Romano, the pope welcomed Father Uzhunnalil at his residence, the Domus Sanctae Marthae, Sept. 13.

Arriving before Pope Francis, the Salesian knelt before him and kissed his feet. Visibly moved by the gesture, the pope helped him up and kissed his hands, the Vatican newspaper said.

Before blessing Father Uzhunnalil, the pope embraced him and said he would continue to pray for him as he had done during his imprisonment.

According to Oman’s state-run news agency ONA, Father Uzhunnalil was “rescued” Sept. 12 by Oman authorities “in coordination with the Yemeni parties.”

Father Uzhunnalil thanked the pope, telling him that “he prayed every day for him, offering his suffering for his mission and the good of the church.”

Recalling his time in captivity, the Salesian told the pope that although he was unable to celebrate Mass, “every day, I would repeat to myself, in my heart, all the words of the celebration.”

Father Uzhunnalil said he continues to pray for all those who have been spiritually close to him, particularly for the four nuns and 12 people murdered when he was abducted.

Also present at the meeting was Cardinal Oswald Gracias of Mumbai, India, who told L’Osservatore Romano that “after this terrible experience, the essential message Father Tom wants to convey is that ‘Jesus is great and he loves us.'”

“Truly, every day, I felt Jesus close to me,” Father Uzhunnalil said. “I always knew and felt in my heart that I was never alone.”