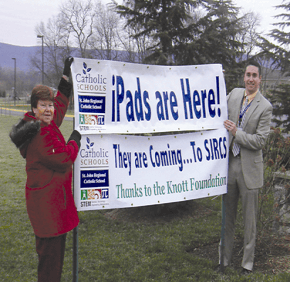 FREDERICK – At home kids use computers to videoconference with friends, comparison shop, buy music and even watch TV shows, so is it any wonder that Catholic school students might find it helpful to draw, learn grammar and study science labs online at school as well?

St. John Regional Catholic School’s educators think so. They are leading Frederick County and the region in integrating 1:1 computing in a new project that will be unveiled during Catholic Schools Week.

Beginning Jan. 31, every eighth-grader will be equipped with an iPad, a tablet computer.

“A lot of kids already use this technology and equipment at home, this is how they learn,” said Sheila Evers, the school’s director of development, who wrote the grant application for $38,740 from the Knott Foundation, with an added $10,000 match from the school’s Home and School Association. “We need to have this as a tool for them at school, so there is no disconnect.”

The idea originated with Principal Karen Smith after conversations with colleagues in the region.

She learned about a program at that a fellow principal, Karen Murphy initiated at Resurrection-St. Paul School involving a sharing of iPads among classes, and became convinced that technology is the future for education.

“We have to prepare these children for the jobs that are out there waiting for them,” said Smith, who has been principal of St. John’s, a K-8 school with 570 students, since 2005.

Indeed, the school’s goal is to have the entire middle school population (sixth through eighth grade) equipped with individual computers as well. The computers are for in-school use only; Internet access is limited with firewalls and attention to approved sites.

Teachers are excited about the change, and have been in training both to learn ways to use the iPads in their lessons and how to teach the 51 eighth- graders to use the computers, which will be given to them in a special event Jan. 31, followed by an “IPad Camp” at which students will spend an intensive day of activities becoming familiar with the tools.

“This is going to be great,” said Laura Donaldson, an eighth-grade science teacher who has already used a Smart Board, a sort of modern-day blackboard, purchased for many classrooms from proceeds from the school book drive.

Her students have used the teacher’s classroom computer in a lesson to test various flows of water and silt to model the erosion process in the classroom. In a new project, for example, each student could be working to test their own erosion model while the teacher monitors’ everyone’s progress simultaneously.

“They’re so tech-savvy already; this will bring our daily lessons to their level and give the kids a way to relate to the material in ways that they are familiar with,” Donaldson said.

Heather Corridon teaches language arts and expects having all the students rewriting sentences together to enhance their grasp of grammar. Arts/enrichment teacher Lisa Kutchin is already planning virtual “trips” to the National Gallery of Art, the Louvre and other famous museums to have her student teams learn about famous artwork.

They are also excited about teacher-friendly web applications that are available, often free, from Apple that allow online and real-time grading. That is one of the reasons iPads were selected for the eighth-grade project, said Evers, who noted, “Apple has made a big commitment to education, and having these computers to try for one grade level will help us to confirm that this is the right equipment when we expand.”

Smith and Evers are excited about the “big picture” possibilities the iPads will bring to their school. Expectations are that students will be healthier because textbooks that they previously hauled home in heavy backpacks will be available on the iPads and can be accessed via the web at home.

Administrators anticipate significant cost savings from downloading textbooks and other materials. Parents should also be pleased at the cost savings; for example, a scientific calculator that is typically $100 can be downloaded onto the computer for 99 cents. Minimization of materials and paper will help the school in its quest to be a Maryland Green School, Evers said.

They admit that they expect adjustments.

“For some teachers, it will be a little unnerving, until they get started,” Evers said. “Technology won’t replace the teacher.”

The adoption of the digital tool gives them the opportunity to confront students with a recent challenge to education: intensive misunderstanding around “cut and paste,” or the ease of abusing Internet sources in research.

“We will be spending a lot of time talking about what is plagiarism and how to do original research,” Smith said.

Evers said being a small school made it easier to test a project than in a large school system, where equipping multiple schools or large student populations could prove costly – though funding is a challenge in a private school and the grant was critical, administrators said.

“By moving to 1:1 computing through the use of iPads, St. John Regional Catholic School is at the precipice of a larger trend in education, where handheld devices are used to enhance students’ education and simultaneously build their technology proficiency, which is essential in today’s digital world,” said Greg Cantori, executive director of the Knott Foundation. “We were pleased to support St. John’s pilot initiative for eighth-grade students and look forward to seeing how the program unfolds, including any measurable improvements in student and teacher performance.”

Smith said the school is pleased to be the pilot school working with Knott.

“We were surprised when we tried to visit schools in the area who were doing this and really couldn’t find any – the only one with a classroom 1:1 was someone we talked to in Florida,” Smith said.

Indeed, Frederick County Public Schools spokeswoman Marita Loose said the local public schools have not yet achieved a 1:1 project. “It would be nice!” she said.

Smith said she looks forward to being the “school to watch.”

“I hope we will be visited and be an example for others to use in projects like this,” she said.