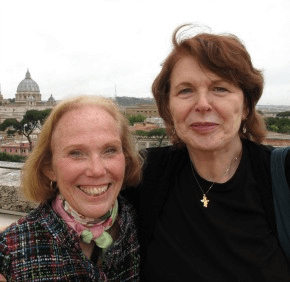 By Paul McMullen
pmcmullen@CatholicReview.org
Twitter @ ReviewMcMullen
ROME – Pam Zusi posed for a photo in St. Peter’s Basilica, visited historic churches where St. Ignatius of Loyola and St. Paul are entombed, and took holy Communion from Archbishop William E. Lori in locations pertinent to the Archdiocese of Baltimore.
Her pilgrimage to Italy, however, peaked when she came within what she estimates was 50 feet of Pope Francis as the popemobile made the rounds in St. Peter’s Basilica after the canonization Mass April 27.
For that, she has Ellen Fitzgerald, her best newt friend, to thank.
The two met for the first time April 21 at Dulles International Airport, as part of a pilgrimage sponsored by the Archdiocese of Baltimore and the Catholic Review. Beyond their height, they have much in common, and headed into the mosh pit of a million plus that were determined to see John XXIII and John Paul II become saints on Divine Mercy Sunday.
“Ellen was my protector all day long,” said Zusi, a parishioner of St. John the Evangelist in Frederick.
“And I have the bruises to prove it,” said Fitzgerald, a parishioner of Our Lady of the Fields in Millersville.
Some Baltimore pilgrims watched the ceremony on a jumbo screen in a square near their hotel, but they were among those who boarded a bus at 4 a.m. at their hotel, less than three miles east of Vatican City but with a throng between them and a prime spot in St. Peter’s Square.
The bus dropped them off on the other side of the Tiber River, and they began hiking west.
“It was a challenging decision for me,” Zusi said. “I didn’t want to miss the opportunity, even though I was somewhat fearful.”
“I didn’t have a hard time deciding to go,” Fitzgerald said. “I had a hard time deciding to stay. We were both terrified of getting lost in the crowd, but we had made a decision, to stay together.”
They entered a mob where some barged their way past women and children, which made it impossible for the Baltimore group to stay together.
“It was like a big piece of ice, a piece would break off,” Zusi said.
“And when they’re gone, they’re gone,” Fitzgerald said. “If we didn’t physically stay together. …”
What resembled a zombie flick changed before 10 a.m. Mass, as pushy people became silent and reverent.
“When it came to the consecration of the saints, I was overly emotional,” Zusi said. “I looked over at Ellen, she was crying, and I was crying.”
The beauty of their morning is that Fitzgerald did not get a glimpse of the popemobile.
Her endurance gave out and she went to sit on a side street “like a bag lady” before Communion, but not before handing Zusi to Deacon George Sisson, who has been assisting Monsignor Robert J. Jaskot, spiritual director for the pilgrimage and his pastor at Holy Family Catholic Community in Middletown.
“George had encouraged us to stay, and by then it was just the two of us with him,” said the petite Zusi. “We forged ahead, got into St. Peter’s Square. After Mass, the crowd was waiting for something to happen, and then we saw the popemobile on the big screen. When he came by, I saw his head and his hat.”
Zusi has six grandchildren, Fitzgerald nine. Both are retired professionals, and mourn their late husbands. Deacon Michael Zusi, who died in May 2006, received his diaconate training from Archbishop Lori in the Archdiocese of Washington, and served St. John the Evangelist in Frederick for 17 years.
Fitzgerald’s husband of 33 years, Eric Legstrom, died Jan. 31. The two shared a vibrant life, motorcycling through all 50 states with the exception of Alaska and Idaho, before he took ill with Alzheimer’s.
A friend told her about the pilgrimage in March, which we signed up for “just under the wire.”
“This is sort of a re-start for me, a new life, a new attitude,” said Fitzgerald, who needed a lift after her husband’s death. “I still had my faith but I was plodding along.
“I stood in front of some of the churches here and just cried. In the Basilica (of St. Peter’s), even with all the people around, I was able to get into a contemplative state. … For me, this is life-changing. It is just a beautiful place to be.”
Also see:
Pole’s predominate in St. Peter’s square
Pope Francis, with retired pope, canonizes Sts. John and John Paul
Archbishop Lori praises pilgrims braving the crowds
Archivist: John Paul II display offers ‘chance to relive’ new saint’s Baltimore visit
Pilgrims follow saints’ examples to Rome
Our Lady of the Mountains parishioner feels at home in Italy, with religious men and women
The canonizations of two popes, by the numbers
Pope John Paul II’s visit to Baltimore touched many lives
Blog: A look back at Blessed John Paul II’s 1995 visit to Baltimore
PrevNext