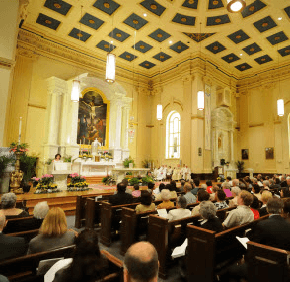 FREDERICK – Lightning struck St. John the Evangelist in Frederick in 1839, two years after its completion.

The cross on top of the telescoping steeple smoldered all night, and in the morning, parish sexton Harry Curry found its charred remains on the ground. When the fire department’s water hose failed to reach the fire, Curry shimmied up the spire with a portable water tank and extinguished the threat, potentially saving the new church from destruction.

Today that steeple still stands as the tallest point in Frederick – a symbol of the parish that claims to have the oldest consecrated church in the Archdiocese of Baltimore.

The parish celebrated the 175th anniversary of the church’s consecration with a Mass and reception April 29, kicking off a jubilee year which will end in May 2013 with a celebration of the parish’s 250th anniversary.

“The idea is to be able to give God thanks for all the people throughout the years that have built up the parish and have kept the ministry of the church going, and hopefully the opportunity for all of us to reflect on that and rededicate ourselves to that mission,” said St. John’s pastor Monsignor Richard J. Murphy, who has been at the parish for six years.

According to a parish history, in a five-hour liturgy that drew every U.S. Catholic bishop, St. John was consecrated April 26, 1837, to set the church apart as a sacred place.

Symbols of that consecration were included in the April 29 Mass, which, at 90 minutes, was short in comparison. Parishioners lit candles under bronze crosses marking the points where the walls were anointed with chrism oil, a ritual only observed on the consecration’s anniversary, said Amy Spessard, the parish’s director of evangelization who organized the celebration.

The current church is the parish’s third worship space.

Because of British penal laws forbidding Catholics to build churches, the parish’s first worship space was in a brick home across the street from the current church. After the penal laws were repealed in 1776, the church laid the cornerstone for its first church in 1800, which was unfinished when Irish-born Jesuit Father John McElroy became pastor of St. John in 1822. Its cornerstone sits next to St. John’s main entrance.

Parishioners credit Father McElroy’s vision in leading an effort to build the current church, which local architect John Tien designed and constructed between 1833 and 1837. The church’s Greek Revival style draws from the Parthenon in Athens, indicating America’s interest in democracy. Its facade features a pediment with St. John the Evangelist and his attribute, an eagle.

The structure was large for its time, but over the years it met the needs of the parish, which has grown to 4,100 families. The church underwent restoration in the early 1990s.

“Everything he did was grand,” he said of Father McElroy, who also founded St. John’s Literary Institute, a male boarding college in Frederick, in 1829, and Boston College in 1864.

“When this church was built, it was the largest church in the eastern United States,” Bishop Rozanski said. “(Father McElroy) built this magnificent edifice so that God’s people would have a home, and he built it because he knew generations after him would come to worship here.”

Located in Frederick’s historic district on the corner of Second Street and Chapel Alley, the church shares its neighborhood with boutiques, bistros and antique stores. Across from the church, Victorian homes stand on the property once home to a large Jesuit novitiate.

The novitiate and Catholic girls school Visitation Academy, which is next to St. John, both served as hospitals during the Civil War, although the church did not.

After the Mass, parishioners volunteered as docents to give tours.

Frederick “was really the heart of Catholicism,” said docent Pam Zusi, 67, whose husband, Deacon Mike Zusi, served the parish for 17 years before his death in 2006.

“When we think of Frederick, we think of it as being a suburb of Baltimore or Washington,” Zusi said, “but when we think of what really took place here 250 years ago and the heart of Catholic education and the spreading of the Catholic faith, I think it’s just really inspiring.”