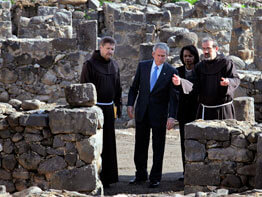 JERUSALEM – Following a grueling schedule of political meetings, U.S. President George W. Bush was thankful for the opportunity to visit some of the Christian holy sites, said a Franciscan friar who accompanied Bush on his visit to Capernaum and the Mount of Beatitudes in Israel.

“He is truly a religious man, and President Bush mentioned how nice it was to get away and to have some (time for) peace and quiet and prayer for reflection,” said Father Peter Vasco, a senior guide for the Franciscan Custody of the Holy Land, which cares for the holy sites. “He said it was so restful and peaceful for him to be there. He loved the Sea of Galilee.”

Bush, who arrived in the Holy Land Jan. 9 to discuss peace with Palestinian and Israeli political leaders, visited the Church of the Nativity Jan. 10 and the Mount of Beatitudes Jan. 11, the last day of his trip in the Holy Land.

Father Vasco said the president was extremely interested in the archaeology of the house of St. Peter at Capernaum, and they read several passages of Scripture related to the site.

“I was very impressed with his spirituality and goodness. He is a deeply spiritual Christian man,” said Father Vasco, an American who said he was proud and happy to help guide an American president through the holy sites. “He certainly wants peace and is very committed to a two-state solution.”

Bush was very friendly and took time out to take individual pictures with the four nuns and the five friars at the site, said Father Vasco.

At the Church of the Nativity in Bethlehem, Father Athanasius Macora, a fellow Texan and a spokesman for the Franciscan custody, said that Bush, who was raised in Texas, chatted with him and teased the priest about still having a Houston accent after so many years in the Holy Land.

“He was very nice. We thought he would be more formal, but he was very simple,” said Father Dides, who was among those who greeted the president.