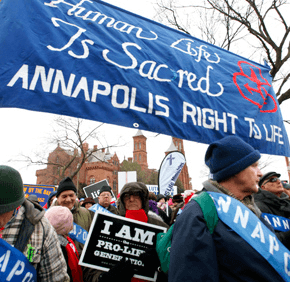 WASHINGTON – “I’m like a mascot,” Maria Royce said as she walked toward the National Mall. Around her, pro-life advocates held signs with slogans such as “Defend Life” and “Stop Abortion Now” as crowds assembled for the annual National March for Life Jan. 25.

Eight-months pregnant, Royce’s belly protruded from her unzipped jacket. She was wearing a shirt she designed in pink with white lettering: “I’m pro-life because I’m pro-woman — especially this little one.”

A parishioner of St. Mary in Hagerstown, Royce, 23, was among hundreds of thousands of pro-life advocates who gathered to walk down Constitution Avenue to the U.S. Supreme Court Building to protest abortion. This year’s rally marked the 40-year anniversary of Roe v. Wade, the U.S. Supreme Court decision that legalized abortion in all 50 states.

To view a photo slideshow, navigate the arrows below:

About 1,400 youths and chaperones from the Archdiocese of Baltimore attended the march, in addition to two-dozen parish groups.

Prior to the march, thousands of youths participated in the Youth Rally and Mass for Life at the Verizon Center. Archbishop of Baltimore William E. Lori and auxiliary Bishop Mitchell T. Rozanski were among the 19 bishops concelebrating the Mass, along with scores of priests from across the country.

Mount de Sales Academy in Catonsville brought 215 young women to the Mass and march. Its campus minister Shannon Collyer said it was important to tie the Eucharist to pro-life advocacy.

“You can’t give what you don’t have,” she said, adding that the Mass was a way to “be filled up before we go out and march in love.”

Emmy Spaar, a Mount de Sales junior, said she attended the events to take a stand for children who have been aborted, she said.

“Being able to add to the number of people coming makes a difference,” she said. “I think that eventually the lawmakers in our country will realize that enough people really don’t agree with abortion and don’t agree with how they’re treating women, and I just want to contribute to that number.”

Lyric McNeil, 16, a student at St. Maria Goretti High School in Hagerstown, said that seeing the crowds of young people inspires her to be “more vocal” in her opposition to abortion.

“I believe in life, and I don’t think that anybody has the right to take that away from anyone,” she said. “If we’re only the young people, and we’re the future, and if we’re doing this now, then that’s a big show of what could happen in the future.”

Royce and her sister – 20-year-old Francesca Singleton, a parishioner of St. Timothy in Walkersville – are among young people who have launched pro-life organizations in their schools and colleges. Royce’s pro-life work has focused on looking at the “right to life” as a secular human rights issue, rather than a religious position – a view that has become more meaningful throughout her pregnancy, she said.

“It’s the most fundamental human right,” she said. “If we can’t identify that, how are we supposed to hold anything else sacred?”

Singleton said the most important thing for young pro-life advocates is for them “not to cave into peer pressure.”

Seeing young people’s enthusiasm encourages Maureen Stansell, the respect life chairman at St. Andrew by the Bay in Annapolis. Stansell, 68, has been involved in pro-life advocacy for 20 years, she said.

The march’s high youth turnout tells her that “the younger generation will carry on the pro-live movement and keep working until abortions are illegal and life is protected,” she said.