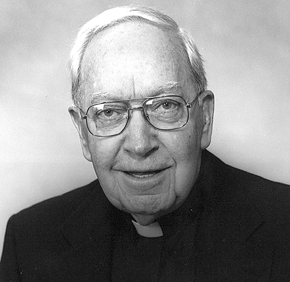 Sulpician Father William James Lee’s tenure as president of St. Mary’s Seminary and University during the 1970s and early 1980s opened the doors to lay leadership at the historic institution.

Father Lee was also friend and consummate teacher to the likes Father Thomas Ulshafer, the Provincial Superior of the American Province of the Sulpicians.

Father Lee died Feb. 19 at the age 89. He had been living at St. Martin’s Home in Baltimore. He was to be buried Feb. 24 at the Sulpician Cemetery in Catonsville following a funeral Mass.

“He was great,” Father Ulshafer said. “I think a lot of people were influenced by him because he was a strong personality. He was involved in all levels in life.”

Initially ordained for the Diocese of Cleveland in 1946, he was admitted to the Sulpicians three years later. He earned masters and doctorate degrees in economics from The Catholic University of America in Washington, D.C.

Father Ulshafer said Father Lee’s was financially “shrewd,” which had long-term benefits for the Sulpicians and St. Mary’s.

Before he came to Baltimore, Father Lee was on the faculty at St. Edward’s Seminary in Kenmore, Wash. and was an assistant to the president for the Divinity College at Catholic University.

He arrived at St. Mary’s on Paca Street in 1958 as a faculty member, teaching sociology and economics.

Father Ulshafer was eventually one of his students.

“As a teacher, he had a reputation of being very demanding,” Father Ulshafer said. “If he called on a student in class, he expected them to have the answer. He kept people on their toes.”

Father Ulshafer continued: “He had a very good sense of humor. He liked verbal sparring matches. If you got to know him, he could give and take it. He loved it when you came back.”

Finally, in 1972, he became the president of St. Mary’s Seminary and University.

“He influenced us as seminarians by emphasizing the importance of knowing about current affairs,” Father Ulshafer said

In the wake of the Second Vatican Council, Father Lee called on lay people to become involved in the board of trustees.

“The lay community had been somewhat distanced from the seminary,” Father Ulshafer said. “He knew he needed to involve lay Catholics in the governance and finances and in other areas that they were a lot more experienced. He was the father of the current board of trustees.”

Father Lee served as the Sulpician provincial secretary from 1981 to 1992 and retired to St. Charles Villa in 1992, where he remained until 2006. He then moved to St. Martin’s Home and lived there until this year.