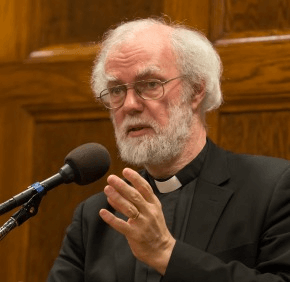 By George P. Matysek Jr.
gmatysek@CatholicReview.org
Theology as a way of life involves asking difficult questions, the former spiritual leader of the Anglican Church said during the annual Dunning Lecture, held April 3 at St. Mary’s Seminary and University in Roland Park.
“Theology is a way of life to the extent that it is faith seeking understanding of the behaviors of faith,” explained Archbishop Rowan Williams, the 104th Archbishop of Canterbury.
The archbishop outlined three habits that form what he called a “nest” in which a theological way of life is possible: self-scrutiny, patience and willingness for conversational discernment.
Patience is needed with those who don’t find it easy to articulate theological living, Archbishop Williams said. It’s also needed with the “chaotic, rich, many-layered language” people use in worship – language that sometimes piles metaphor on metaphor, he added.
In the Christian context, Archbishop Williams said, theological living happens in connection to certain moments of encounter, both individually and collectively. That could include the classic conversion experience of an individual, he said, or the awakening of an entire society as in the case of the abolition of the slave trade in 1807 in Great Britain. Such moments are not only experiences of liberation, he said, but steps into a “positive new identity.”
Theology as a way of life means praying truthfully, with integrity, Archbishop Williams said.
During a question-and-answer period following his presentation, Archbishop Williams agreed with a questioner who said the sacrament of reconciliation provides a good example that embodies the principles discussed in his presentation.
“In hearing confessions, I find again and again that what I’m engaging in is exactly those three things of asking myself questions as I listen to someone else’s self-questioning,” Archbishop Williams said, “sometimes thinking what the penitent is saying to me is a gift from God to challenge me.”
The archbishop said it can be a “very demanding process” of finding the words people really want to speak in the context of the sacrament. Dialogue helps clarify what is and what isn’t really a matter of repentance, he said.
Although he said the sacrament of reconciliation can sometimes be practiced mechanically or even corruptly, the archbishop saw great value in it. A church that doesn’t make some kind of provision for confession is “all the poorer for it,” he said.
The Dunning Lecture was sponsored by the Ecumenical Institute of Theology at St. Mary’s Seminary and University. It is named in honor of an endowment presented to the institute by J. Fitzgerald Dunning, one of the institute’s first honorary directors. The lectures have been offered annually since 1972.
Also see:
Archdiocesan statement regarding allegation against high school teacher
Loyola University chemistry/bio major donates $1.5 million to the school
PrevNext