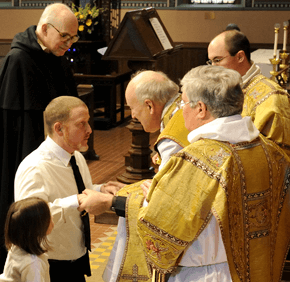 When Father Jeffrey Steenson laid his hands on Veronica Moore and gently crossed her forehead with holy oil during a special Jan. 22 Mass at Mount Calvary Church in Baltimore, tears flowed freely down Moore’s cheeks.

An Episcopalian her entire life, Moore was received and confirmed into the Catholic Church and was joined by 33 fellow Mount Calvary parishioners who knelt before Father Steenson one by one to do the same.

Several others in the formerly Episcopalian parish were also reconciled to the Catholic Church at or prior to the liturgy, bringing the total number of those brought into full communion to 42.

“I felt it was the right thing to do to go back home to the Catholic Church,” said Moore, who still had tears in her eyes following a lengthy liturgy that featured solemn chant and jubilant organ music. “I feel a great sense of joy.”

Mount Calvary has had a 169-year history with the Anglican Church. In October, 2010, the parish’s vestry unanimously voted to leave the Episcopal Church and become a Catholic parish that makes use of the Catholic “Anglican-use” liturgy – maintaining elements of Anglican worship and tradition.

The parishioners were the first group of Americans to be received into full communion with the Roman Catholic Church through the newly established Ordinariate of the Chair of St. Peter, an ecclesiastical structure created by Pope Benedict XVI to make it easier to welcome former Episcopalians into the Catholic Church.

Father Steenson is the newly appointed leader of the ordinariate and is known as the “ordinary.”

In his homily, Father Steenson said the new ordinariate is like being on a newly built airplane that’s sitting on a runway as the controller says, “throttle up.”

“We’re rolling down the runway with this plane that’s never flown before,” Father Steenson said. “All we have is an abundance of faith, hope and charity.”

Father Steenson noted that Pope St. Stephen endured much criticism for allowing those who left the Catholic Church in the third century to return to full communion. It was an act of charity that is being repeated by Pope Benedict, Father Steenson said.

“It is an act of enormous pastoral kindness,” Father Steenson said.

A former Episcopalian bishop, Father Steenson recalled his own reception into the Catholic Church and how he was moved when the priest who received him said, “That in the unity of the Holy Spirit, you may have full communion with us.”

“My friends,” Father Steenson said, “what I hope and pray for you is the gift of the joy of being Catholic.”

Mount Calvary parishioners will lose nothing of their Anglican heritage, he said.

“We will lose nothing of what is of value to us – of what the Catholic Church has always recognized as good and holy and oriented dynamically toward Catholic unity,” he said, “but what we gain in the gift of full communion is to belong to that which is of the very will of Jesus Christ.”

Many of those who entered the Catholic Church said they were drawn to the sense of orthodoxy in their new spiritual home. They had undergone catechetical training from Catholic priests. Dominican Father Carleton Parker Jones, pastor of Ss. Philip and James in Charles Village, served as their confirmation sponsor.

“I don’t believe in women priests, same-sex marriages or homosexual bishops,” said Nixon A. Camper, a longtime Mount Calvary parishioner. “I felt this was the right thing to do.”

Mount Calvary reached an agreement with the Episcopal Diocese of Maryland to keep its church building, adjacent offices and rectory, as well as all furnishings and personal property.

It will retain the right to use the parking lot shared with Joseph Richey House, an adjacent hospice that was begun by Mount Calvary and the All Saints Sisters of the Poor, a formerly Episcopal religious community that is now a Catholic priory in Catonsville. The hospice will be permanently deeded to Richey House, along with the parking lot it shares with Mount Calvary.

The Episcopal Diocese will receive a monetary sum as part of the settlement, and will retain first right of refusal if the congregation vacates the property.

Jason Catania, the former pastor of Mount Calvary who was received into the Catholic Church with his parishioners, was joined by three other priests who came into the church the same day. The former clergymen will begin a formation program to become Catholic priests.

David Reamsnyder, one of the priests, was received into the church at the same time as his wife, Beth, a former Catholic, was reconciled to their church, and their son, Charles, received his first Communion and their infant daughter, Cora Elizabeth, was baptized.