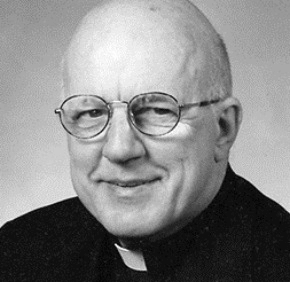 By George P. Matysek Jr.
gmatysek@CatholicReview.org
Twitter: @ReviewMatysek
Father Richard P. Wojciechowski, former longtime pastor of Christ the King in Dundalk and a well-known chaplain for the Baltimore County Police, died Jan. 20 at age 77 after years of declining health.
Raised in Holy Rosary Parish in Fells Point, Father Wojciechowski knew from a young age he had a call to the priesthood.
He entered St. Charles College, a minor seminary in Catonsville, after graduating from the eighth grade at Holy Rosary School. He completed his seminarian studies at St. Mary’s Seminary in Roland Park and was ordained by Cardinal Lawrence Shehan in 1963.
Father Wojciechowski served as an associate pastor of Holy Rosary from 1963 to 1966, from 1967 to 1968 and from 1976 to 1978. He also was an associate pastor of Sacred Heart of Mary in Graceland Park from 1966 to 1967; St. Stephen in Bradshaw from 1968 to 1970; St. Rita in Dundalk from 1970 to 1973; and Church of the Annunciation in Rosedale from 1973 to 1976.
Father Wojciechowski was the pastor of Christ the King in the Turners Station section of Dundalk from 1978 until the parish closed in 2003, the same year he retired.
“He loved his parishioners with incredible devotion,” said Monsignor James Farmer, pastor of St. John in Westminster and a longtime friend. “He had enormous love for the Blessed Sacrament and the Blessed Mother.”
Monsignor Farmer recalled that Father Wojciechowski spent long nights with police officers and their families when there were automobile accidents or other tragedies. Father Wojciechowski was also a chaplain to the Knights of Columbus.
“He gave everything he had to serve his people,” said Monsignor Farmer, who delivered the homily at Father Wojciechowski’s Jan. 26 funeral Mass at Holy Rosary. Archbishop William E. Lori was also present for the liturgy, serving as presider.
One of the highlights of the year for Father Wojciechowski was the annual Forty Hours eucharistic procession at Christ the King. Monsignor Farmer remembered that his friend invited priests to join him for a meal before the Mass. They would then participate in a procession around the church, singing traditional eucharistic hymns with parishioners.
Irene Spatafore, a parishioner of Our Lady of Hope in Dundalk, told the Catholic Review in 2000 that Father Wojciechowski often shopped yard sales looking for items to donate to crisis pregnancy centers. He inspired Spatafore and others to do the same.
Father Wojciechowski had a “great laugh” and a great sense of humor, Monsignor Farmer said, and was proud of his Polish heritage.
“Every Sunday of the year, without fail, he would have eggs and Polish sausage for breakfast,” Monsignor Farmer remembered with a laugh.
A declining parish registry forced the closure of Christ the King, a moment that was “heartbreaking” for Father Wojciechowski, Monsignor Farmer said.
In his later years, Father Wojciechowski was blind and had limited mobility. After his retirement, he lived at St. Stephen’s Green in Timonium and then Stella Maris, where he died.
To read more obituary articles, click here.
PrevNext