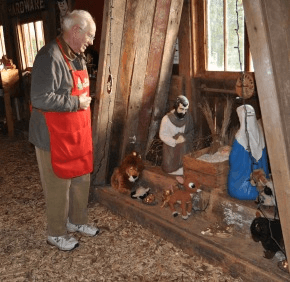 By Maria Wiering
mwiering@CatholicReview.org
UNION BRIDGE – “Everyone, I have an announcement!” shouted Michael Ryan to the crowd of 40 milling outside his red wooden barn.
Interest piqued, they dutifully followed Ryan’s request to head inside. Longtime customers of Ryan’s Clemsonville Christmas Tree Farm, they already knew the barn was brimming with holiday decorations and scenes, including a room where visitors can peak in on a life-size slumbering Santa doll, replete with audio of deep snoring.
In the same room, they found their group leader, Jim Lucey, momentarily joining the scene. He sat at a desk with a vintage typewriter playing the part of a writer calling his agent, begging for more money to finish a book, “Finding the Perfect Christmas Tree.”
The onlookers chuckled, clearly used to Ryan’s creative antics to surprise and engage his visitors, especially members of Lucey’s Montgomery County-based group, who have cut their Christmas trees at the farm for 38 years.
“It’s become really important to everybody,” Jim Lucey said of their tradition.
Ryan, 81, bought the 230-acre Carroll County farm in 1965 with Christmas trees in mind. He had sold Canadian evergreens as a child growing up in the Bronx. In 1974, he sold the first trees from his own land.
At the height of the market in the late 1970s and early 1980s, Ryan sold 4,000 trees a year, but now hopes to sell 1,200. The artificial tree changed the market, he said, but the farm’s low prices and festive atmosphere attract those seeking a traditional experience.
“It’s so homey, so down-to-earth,” said Pat Kilroy, a parishioner of St. Joseph in nearby Sykesville, who scouted trees Nov. 29 with his wife, Laurie. “Mike and Mary are the perfect image of going out into the countryside and imagining where your Christmas tree would come from.”
Ryan and his wife, Mary, attend St. Peter the Apostle in Libertytown when they’re at the farm, and St. Charles Borromeo in Pikesville when at their Owings Mills condo.
Michael developed the farm while selling school furniture, and relied on his three sons for help planting and growing the trees. His second son, Paul Ryan, 49, recalls early mornings and late nights in the weeks between Thanksgiving and Christmas, when he and his brothers would sell the trees, which all cost $20. During the summers, the brothers would rope in classmates from Calvert Hall College High School in Towson to help them care for the pine, spruce and furs.
A parishioner of Our Lady of the Fields in Millersville, Paul still helps on the farm, and brings his wife, Kathy, and their daughters: Elizabeth, a junior at Mount de Sales Academy in Catonsville, and Katherine, an eighth-grader at School of the Incarnation in Gambrills.
Paul calls his dad “the perfect combination of Thomas Jefferson and Walt Disney.”
“I do try to make them smile,” Michael Ryan said. “The nice thing about this business is that everybody who comes has great expectations. All you have to do is cooperate with them.”
Besides the Christmas barn, the Ryans maintain a neoclassical house built in 1796 by the original landowner, John Clemson. It was modeled after George Washington’s Mount Vernon manor, said Ryan, who has carefully restored its 18th-century feel, as if “Thomas Jefferson and Ben Franklin could come out of the woodwork.” Like the barn, it is decorated for Christmas year round.
The farm also boasts an “everlasting tree” – a 50-foot-long triangular hillside rock formation – and a now-surpassed credit in the Guinness Book of World Records for a 116-foot wreath.
Parishioners of St. Rose of Lima in Gaithersburg, Jim and Noreen Lucey saw an advertisement for Ryan’s farm at a grocery store in 1976 and decided to go. The 80-mile round-trip became an annual tradition with as many as 50 friends and extended family. This year, two of the Luceys’ adult children took trees back to their homes in New York and Connecticut.
For newer customers, the tradition is no less meaningful. Becky Maticic, 37, cut trees with her two young sons and several friends, strapping the pines to a John Deere Gator for the short drive back to their farm. She and her husband started going to the farm in 2004, and it was one of his favorite Christmas traditions. After he died two years ago, she vowed to continue the tradition with her boys.
“(Ryan) made us feel so at home,” Maticic said. “We felt like he was our grandfather. We were like, ‘We have to go back to Granddad’s house each year and cut our own tree down.’ We’ll find a tree no matter what. It’s about the ambiance of the whole situation.”
Ryan insists he and Lucey will actually author a book on the perfect tree one day. That tree’s definition, however, may be hard to pin down. Lucey jokes that the perfect tree is the one closest to the car, especially in cold weather.
As for Ryan, his perfect tree is symbolic of the Christmas spirit, and can take any shape or size.
“The perfect Christmas tree is almost any tree that you select, then you bring it home and decorate it, put some ornaments on it, and find a couple grandchildren and squeeze them under it,” he said. “It’s in the eye of the beholder.”
Also see:
Four tips to keep your Christmas tree fresh
Advent pop quiz!
Advent ritual – Week two
Advent joy on the feast of St. Nicholas
PrevNext