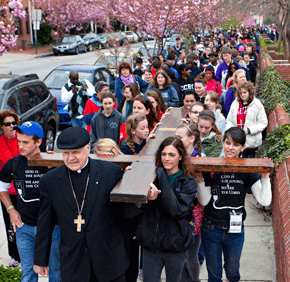 The rain that overwhelmed the 2011 Youth and Young Adult Pilgrimage in in Baltimore City could easily have deterred hundreds, such as Rebekah Bateman, from doing it again.

“I came here and it was pouring down raining,” recalled Bateman, a high school-aged parishioner of St. Stephen in Bradshaw, who attended last year. “I figure if I can endure that, I can come back and do it even better this year. We just can’t wait to get going and get walking.”

The pilgrimage, begun in 1994 by Cardinal William H. Keeler, is considered the unofficial start of Holy Week in the Archdiocese of Baltimore. Pilgrims walked four miles total, from St. Mary’s Historical Site to St. Casimir, with stops along the way.

At the start, Cardinal O’Brien continued the tradition of carrying a large wooden cross for several blocks with pilgrims. When they arrived at the Basilica of the National Shrine of the Assumption of the Blessed Virgin Mary, he led a solemn adoration of the Blessed Sacrament.

In his reflection talk, Cardinal O’Brien said Christ provided an example of acting out love.

“The cross reminds us of what God did for us in Jesus,” the cardinal said. “He died on the cross out of love. Love always involves some death – death to self for others. Isn’t it true of marriage? Isn’t it true in family life? Isn’t it true in any vocation we are called to? If we love, we will surrender ourselves. We will empty ourselves.”

The message of sacrifice resonated with the young people.

“It’s good to offer up this long journey to Jesus for all that he did for us,” said Daniel Kramer, a parishioner of Our Lady of the Chesapeake, Lake Shore.

During the afternoon, the Jacob and Matthew Band got the pilgrims dancing at the Shrine of St. Alphonsus with a concert. As the pilgrims wound their way to War Memorial Plaza to pray the rosary, they grew in confidence.

“Everyone stops and stares at us,” said Carina Danchik, a parishioner of St. Michael, Poplar Springs. “I’m kind of scared to share my faith with people, but I can do this because I’m in a big group.”

Ben Armero, an Our Lady of the Chesapeake parishioner, said he was fulfilled after leading the rosary for a few minutes.

“From the concert to the rally to this, it’s all been great,” he said.

The pilgrims concluded by walking to St. Casimir in Canton, where Palm Sunday Mass was celebrated by the cardinal and Bishops Denis J. Madden and Mitchell T. Rozanski. It featured a dramatic reading of the Passion Gospel.

By the end of the day, the teens realized they’ve been charged with continuing and promoting the faith for their generation and for those to come.

“The whole day became about grace and blessing,” said D. Scott Miller, director of the Division of Youth and Young Adult Ministry, which sponsored the pilgrimage. “The joy and enthusiasm of our young people is definitely a blessing to the church.”