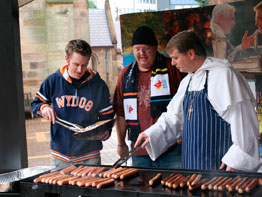 SYDNEY, Australia – Talk about a barbecue for the ages.

What’s being considered Australia’s largest-ever barbecue is being planned for July 16 when World Youth Day 2008 links with Rotary Australia to serve lunch to more than 120,000 pilgrims at 200 locations around Greater Sydney.

“There’s no better way to welcome young people to our country than to host a traditional barbecue,” said Sydney Auxiliary Bishop Anthony Fisher, World Youth Day coordinator, as he turned sizzling sausages and onions on a barbecue June 8 and invited onlookers to sample the “smell and flavor of Aussie hospitality.”

The Big Aussie BBQ will involve 80 Rotary clubs joining with parishes to serve the pilgrim lunch at catechesis venues scattered around the city. Some 220,000 sausages are on order, along with just as many bread slices, slices of onions and servings of tomato sauce, or ketchup in American parlance.

The midday barbecue is just one of the meals being planned for the thousands of visitors from 170 nations who will make their way to Australia for World Youth Day July 15-20.

In all, more than 25 million food items – enough for 3.5 million meals – are on order for the six-day celebration. The items will be included in more than 900,000 hot evening meals served at locations around Sydney.

Bishop Fisher said all preheated dinners will be gluten free.

Geoff Morris, director of pilgrim services for World Youth Day, said his team has the “very special challenge” of planning to feed the largest mobilization of young people in Australia’s history, even more than the 2000 Summer Olympics in Sydney.

“We want to provide pilgrims with a good feed and a little bit of an Australian taste,” he said. “We have tried to do that by including some of our more iconic items such as Tim Tams (chocolate biscuits), Weet-Bix Crunch (cereal), Vegemite (Australian yeast spread), lamingtons (chocolate-coated sponge cake cubes) and good old baked beans.”

Cadbury will provide 425,000 chocolate bars, produced in the state of Tasmania.

All that is in addition to nearly 1 million pieces of fresh fruit and more than 2.4 million bottles of water that will be consumed by the hungry crowds.

Cutlery and packaging will add 5.5 million items, with an emphasis on reusable and recyclable packaging.