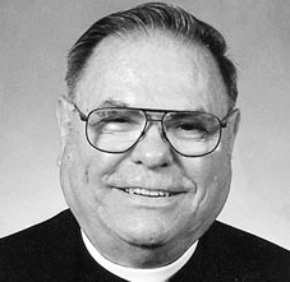 By Erik Zygmont ezygmont@CatholicReview.org
Father Leo R. Tittler, who died Feb. 18 at 82, was remembered as a caring and generous priest.

“He endeared himself to many just by his caring acts,” said Monsignor Richard J. Murphy, who will deliver the homily at Father Tittler’s funeral Mass, scheduled for Feb. 24 at 10:30 a.m. at St. John the Evangelist Church in Frederick, where he served as senior priest from 2001 to 2005.

Born in Altoona, Pa., in 1935, Father Tittler was the seventh of 10 children and attended elementary school at his parish, St. Leo in Altoona.

His family was strongly Catholic, according to the Archdiocese of Baltimore; two of his sisters would go on to become religious sisters.

He entered the Third Order Regular of St. Francis, taking the name “Leo” when he professed his solemn vows in 1959, in honor of St. Leo the Great. His given name was Charles.

Father Tittler was ordained a priest for his order June 8, 1963, at the Basilica of the National Shrine of the Immaculate Conception in Washington, D.C.

According to the Archdiocese of Baltimore, he taught at a minor seminary and a boys’ school before he was incardinated into the archdiocese in 1972.

Father Tittler’s early assignments included associate pastorships at St. Stephen in Bradshaw and St. William of York in Ten Hills, in 1970 and 1972, respectively.

He became associate pastor of St. Peter the Apostle in Libertytown in 1975 and pastor in 1977. He was appointed area pastor for Western Maryland and a consultor for the archdiocese in 1980.

Father Tittler became pastor of Our Lady of Mount Carmel in Thurmont in 1992, serving there until he became senior priest at St. John the Evangelist in Frederick in 2001.

Throughout his ministry, Father Tittler said he tried to promote a sense of collaboration and cooperation among the parishioners he served.
“It’s important because it’s their parish and you wanted to help them see that it’s part of their job to work together with the pastor,” Father Tittler said in a 2005 interview with the Catholic Review about his retirement. “In all the parishes I’ve been in, I was happy to be there and I really got to know a lot of people.”

Monsignor Murphy, who is retired, got to know Father Tittler when the two served together in Northwood, Hydes and Frederick.

When his father was dying, Monsignor Murphy remembered, Father Tittler would relieve him and his mother, spending long night hours at the man’s bedside.

“That was typical of Leo’s ministry,” Monsignor Murphy said. “He was always ready to do something for someone.”

Another talent of Father Tittler’s, his friend added, was “seeing the good in people and affirming that good when they didn’t see it themselves.”

“He might have been counseling somebody who struggled with anger,” Monsignor Murphy explained. “He would also show them the times they were patient, maybe with their children, and had responded correctly.”

Father Tittler enjoyed travel. Monsignor Murphy recalled a Caribbean vacation in which the two of them and a third companion struggled for hours, “and I mean hours,” to learn windsurfing, culminating in a headfirst fall by Father Tittler, first into his sail and then into the sea.

“At dinner that night, we ran into a group of people who told us they should buy us a drink,” he remembered, “because we had provided the entertainment and comic relief for their entire day on the beach.”

Amy Spessard, director of religious education at St. John the Evangelist in Frederick, remembered Father Tittler’s kindness towards the youth of the parish.

“He loved being with the youth during the Mass, sacrament preparation and especially Scouts,” Spessard wrote in an email. “As a former Scout leader, he would often ask me about what the youth were doing, where they were camping, etc.  He came to many Pack 274 events like the Pinewood Derby and the Blue and Gold Banquet.”

“He celebrated many Scout Sundays with us and always made the Scouts and their families feel welcome at St. John,” Spessard said.

Father Tittler’s nephew, Donald Schuman, told the archdiocese that the priest was just as kind to the children in his own family, never forgetting a birthday among his nieces and nephews.

“He made sure to spend time with his family over the years, whether he was serving as a Franciscan brother or a priest for the Archdiocese of Baltimore,” Schuman said, according to the archdiocese.