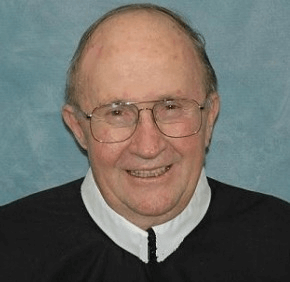 Redemptorist Father Thomas Brendan Loftus, who served at Sacred Heart of Jesus-Sagrado Corazón de Jesús in Highlandtown and Our Lady of Fatima in Baltimore, was remembered for the personal commitment behind his strident preaching.

A funeral Mass was offered June 4 at Stella Maris in Timonium for Father Loftus, who died May 31 at age 83.

“He had a deep love for the Lord and the church, and he wanted to share that with the people of his congregation,” said Redemptorist Father Gerard Knapp, whose home parish is Sacred Heart of Jesus.

When he was in town to visit family, Father Knapp would sometimes fill in for or concelebrate Mass with Father Loftus, who served as Sacred Heart’s pastor 1996-2002.

“He believed in what he said, and he said it loud and clear,” Father Knapp remembered.

According to an obituary provided by the Redemptorist Provincial Residence in Brooklyn, N.Y., Father Loftus was born in 1931 in Brooklyn, professed his first vows with the Redemptorists in 1952 in Ilchester, and was ordained to the priesthood in 1957 at Mount St. Alphonsus in Esopus, N.Y.

He completed his theological studies in Esopus and his second novitiate at St. Mary in Annapolis. For the next 17 years, from 1959 to 1976, he served as a missionary in Brazil.

He then returned to the U.S. and served eight years in Port Ewen, N.Y. In 1984, he arrived in Baltimore, serving at Sacred Heart and Our Lady of Fatima.

From 1990 to 1996, he served in Rochester, N.Y., and then returned to Sacred Heart, where he was pastor until 2002. While in Highlandtown, he also oversaw the parish’s two mission chapels in East Baltimore, Holy Redeemer and St. Gerard, both of which closed in 2002.

Father Knapp said Father Loftus “challenged the people to be faithful Christians and faithful Catholics.” To Father Loftus, that meant attending Mass every Sunday and making use of the sacraments, but also going “above and beyond that to be a charitable person, particularly toward those who could not take care of themselves,” Father Knapp said.

He added that Father Loftus liked to stand outside of church to greet parishioners both before and after Mass.

“He was present to the people,” Father Knapp said.

He also noted the elder priest’s fondness for the game of golf, as did his classmate, Redemptorist Father Robert Lennon, who drew a parallel between the hobby and Father Loftus’ appreciation for structure.

“He paid attention to detail and enjoyed helping his confreres in that way,” Father Lennon commented, according to the obituary provided by the Redemptorists. “Perhaps that’s why he enjoyed playing golf, since the game has guidelines and conventions that must be followed.”

Both Father Knapp and Father Lennon observed that Father Loftus lived fully up to the end of his life, keeping up on current events with the newspaper and staying active.

“I do know that a round of nine holes really helped him to relax, especially when he was battling cancer and started failing in health,” Father Lennon said, according to the Redemptorists. “Whenever he could, he pressed forward for as long as he could. In that way, he certainly set a great example.”