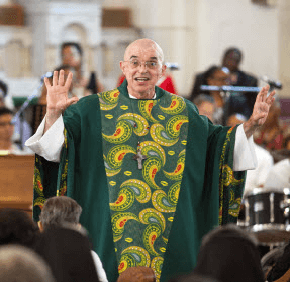 Vincentian Father Sylvester Peterka typically spent one week praying about an assignment before accepting it. But in 1989, he didn’t hesitate and accepted the offer to come to Immaculate Conception in Baltimore.

“Never in my life have I responded immediately,” said Father Peterka, 62. “My time here (in Baltimore) has been a time of blessing in terms of the people I love and serve.”

“It’ll be a challenge,” Father Peterka said, but similar to Baltimore.

Father Sheridan was pastor of a Philadelphia parish Father Peterka is now at and Father Bonenge was chaplain of the Basilica and National Shrine of St. Elizabeth Ann Seton in Emmitsburg.

Growing up, Father Peterka wanted to be a farmer.

“God just plants a seed,” Father Peterka said. “I love the Lord and his word. I know God has blessed me. I almost didn’t become a priest because I didn’t feel myself worthy.”

Father Peterka, who was diagnosed in April 2011 with skin cancer on his face, “thought within a year I’d be dead. I thought about how good God had been to me and tears came to my eyes.”

Ordained in 1976, Father Peterka has taught religion, coached cross country, basketball and golf and served as an assistant athletic director at a high school outside of Philadelphia; was director of students at a New Jersey high school; and was the Catholic campus minister at Auburn University in Auburn, Ala.

During his first five years at Immaculate Conception, Father Peterka spent two months each summer in New Orleans at the Institute of Black Catholic Studies at Xavier University of Louisiana learning how to better serve his flock. Father Peterka is Caucasian.

From 2002 through 2011, Father Peterka traveled to Africa on sabbatical and taught seminarians, an experience he relished.

“To see the faith, the faith of the African community, to see the faith in Africa,” Father Peterka said, was moving. “They are poor, but they walk with pride, a sense of hope.”

In Baltimore, Father Peterka helped to found Freedom Advocates Celebrating Ex-Offenders, a nonprofit organization that assists felons leaving prison with “what their needs are,” he said.

The organization was founded in part because of his passion for prison ministry, “something really close to my heart,” Father Peterka said.

Praying for an end to the drug trade around the urban parishes, Father Peterka and parishioners prayed on the church steps where drugs were sold and used and went on prayer walks around the churches.

Therese Wilson Favors, director of the archdiocesan Office of African American Catholic Ministries and a parishioner of St. Cecilia for 60 years, called Father Peterka “a very humble man; he takes seriously his vows of poverty and obedience.”

“He’s a man who will walk the streets at night,” Wilson Favors said. “He really does try to walk in the shoes of St. Vincent. He is a profound Christian leader, a leader who leads by example, a leader who takes seriously his role of pastor.”

“It’s a challenging situation,” Monsignor Farmer said, “and he handled it with great devotion and great love. He’s a man of deep faith. He loves Jesus deeply and he loves the people he serves deeply.”