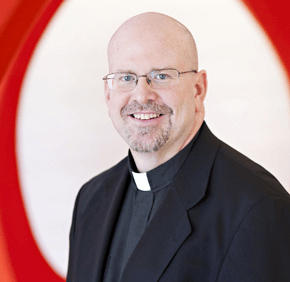 By Elizabeth Lowe
elowe@CatholicReview.org
Twitter: @ReviewLowe
Father Paul Sparklin can truly identify with the patients he visited at The Johns Hopkins Hospital in Baltimore. It wasn’t long ago that he was a patient himself.
In July 2010 Father Sparklin was diagnosed with stage IIIa colon cancer. Days after his diagnosis, he had more than 5 feet of his colon and two cancerous tumors removed.
He went through six months of chemotherapy, which caused neuropathy, an abnormal and degenerative state of the nervous system, in his fingertips and feet.
He had been a Hopkins chaplain since December 2005, as his last day there was to be June 28. Effective July 1, he will be the administrator of St. Elizabeth Ann Seton in Crofton.
At a Johns Hopkins Cancer Survivors Day event June 3, nearly two years after his diagnosis, Father Sparklin spoke about his experience with cancer.
“For me,” he said, “survivorship is a gift from God. With any gift from God there is a task. My task is to continue to live my life as a priest in service to God’s people, to walk with people on their journey and to share the faith and preach a word of hope.”
Father Sparklin, 48, said afterward, “It was agonizing to speak. It still is difficult to talk about it.”
Being a cancer survivor has given Father Sparklin “the ultimate feeling of understanding.”
“I think the whole experience has helped me listen and empathize with what patients are going through,” Father Sparklin said. “I can certainly empathize with this experience and to hone in on what they’re feeling.”
To ensure he is cancer free, Father Sparklin has routine CT scans and colonoscopies.
“So far, so good,” Father Sparklin said. “The scans are clear.”
He is in remission, but being cured “would be the best case scenario down the road,” Father Sparklin said.
“I know that I’m not alone in the experience,” Father Sparklin said. “I know God is always with me. I try to say that to patients. I try my best to convey this to them, that they’re not alone.”
Ty Crowe, director of the department of pastoral care and manager of clinical pastoral education at Johns Hopkins Hospital, said Father Sparklin is “very dedicated to his ministry.”
“I think he leads off with a lot of sincerity, and I think that goes a long way,” Crowe said, “especially when you’re meeting people you don’t know, sometimes in the most vulnerable spot. Sincerity – that’s all you need to be received by a family or a patient.”
Ordained for the Archdiocese of Baltimore in 1991, Father Sparklin was an associate pastor of Church of the Nativity in Timonium and St. Joseph in Fullerton before serving at Immaculate Conception in Towson.
After leaving the Towson parish in July 2004, Father Sparklin spent a year taking clinical pastoral education courses to learn how to be an effective chaplain. He called being a chaplain “a vocation within a vocation.”
“Ecstatic” about his new parish position in Crofton, Father Sparklin said a replacement at Hopkins has not yet been named.
As a priest, Father Sparklin will continue to visit the sick.
“I think that’s important,” Father Sparklin said. “This is all part and parcel of being a priest. It’s part of what Jesus did.”
Copyright (c) July 2, 2012 CatholicReview.org
PrevNext