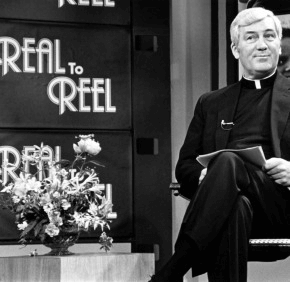 By Paul McMullen
pmcmullen@CatholicReview.org
Twitter: @ReviewMcMullen
Jesuit Father Leo A. Murray, who applied his skill and vision to appointments in the Archdiocese of Baltimore that ranged from its director of communications to high school principal to pastor, died July 23 at St. Joseph’s University in Merion Station, Pa.
Father Murray was 85.
A Baltimore native, he attended the parish school at Ss. Philip and James Parish in Charles Village, and went to what is now Loyola Blakefield, graduating in its class of 1949.
He received both his bachelor’s and master’s degrees from Weston College in Massachusetts; earned a licentiate of Sacred Theology from Woodstock College in western Baltimore County; and a doctor of Sacred Theology from the Institut Catholique de Paris in France.
“Leo was highly intelligent and compassionate, and extremely personable,” said Jesuit Father William J. Watters, retired pastor of St. Ignatius in Baltimore. “He was a very creative person, who was ahead of his time in many ways.”
Father Murray taught Latin, French, religion and communications at his prep alma mater, what was then Loyola High School, before serving as both its president and headmaster from 1970 to 1973.
Father Watters, then a religion teacher at Loyola High, and other faculty describe Father Murray’s tenure as a turbulent time for the school on N. Charles Street.
“Loyola was designated as an experimental school, one of five in the (Jesuits) Maryland Province,” said John Stewart, then a math teacher, now assistant to the president. “He was charged with changing a very traditional school into one with more student freedoms.”
Stewart and Father Watters described an open learning environment, and a relaxed dress code and structure.
“He (Father Murray) wanted students to have a cross-cultural education, and wanted the faculty to be more integrated in their presentation of subject matter,” Father Watters said. “How, for instance, are physics and math integrated, rather than divided?
“We had very open classrooms and an open campus, which he thought was conducive to students never stopping educating themselves. There were no bells, because students were expected to get to the next task on their own. There was a certain amount of fluidity. … Traditional educators thought it was chaotic.”
The experiment lasted two years.
“Maybe it was too much, too soon for some constituents,” Stewart said, “but he (Father Murray) did a splendid job in difficult circumstances. His door was always open, and he was always available. I give him a lot of credit for where Loyola is today.”
Father Murray’s emphasis on lifelong learning was evidenced by a member of the Loyola High class of 1972.
“He (Father Murray) was at Yale Divinity School after his time at Loyola, while I was an undergrad there,” said Henry Hooper, a resident of Portland, Ore. “He introduced me to the famous theologian, Henri Nouwen, who lived in the same house in New Haven.
“Father Murray took me on a religious retreat to Wernersville (Pa.), which proved jolting to my poor understanding of the Eucharist. … He was a teacher at heart and his homilies had that quality of learning, leading and prodding – so Jesuit. He asked great questions.”
Father Murray officiated at the 1984 wedding of Hooper and his wife, Tracy.
After serving as rector of Gonzaga High School in Washington, D.C., Father Murray returned to Baltimore in 1978 and eventually became pastor of St. Ignatius Parish on Calvert Street.
“We lived in community at St. Ignatius,” said Father Watters, who served two stints as pastor of the parish. “He was a tremendous homilist. I don’t think I ever heard him give a homily that was not a good one.”
From 1983 to 1986, Father Murray served as director of communications for the archdiocese. His ministry included “Real to Reel,” a Friday night television show with Archbishop William D. Borders.
“It was really ahead of its time, in terms of making the archbishop accessible to the questions of people in the pews, in a very public forum,” said Daniel Medinger, then editor of the Catholic Review and now president of Advertising Media Plus. “Archbishop Borders was a great teacher of the faith and he loved the Q-and-A format. Father Murray was a great moderator. It was great television and substantive evangelization.
“Father Murray was a supremely professional representative of the church. He was knowledgeable and candid. He also was available, which is important on deadline. He was always respectful of the important role that the Catholic Review played in communicating with the Catholic community.”
From 1987 to 1990, Father Murray served in London as director of the Jesuit-sponsored Center for Communications and Culture.
He also served as director of communications for the Jesuits’ Maryland Province; led retreats at Manresa-on-Severn and was assistant director of a Woodstock Theological Center program that assisted priests in what his order described as “effectively preaching biblical and social justice.”
He spent a year as principal of St. Ignatius Loyola Academy, a tuition-free middle school for boys in Baltimore.
Father Murray served as pastor of Old St. Joseph’s Church in Philadelphia, and from 2003 to 2013 as parochial vicar at Holy Trinity Church in Washington, D.C., where his ministry included “Shepherd’s Flock,” which offered Mass for children with disabilities.
A viewing will be held at the Jesuit residence at Wolfington Hall at Georgetown University, July 29, from 3 to 5 p.m., and July 30 from 9 a.m. to 10:15 a.m. at Holy Trinity Church in Washington, D.C., 36th and O Streets, NW, where a funeral Mass will be offered July 30 at 10:30 a.m.