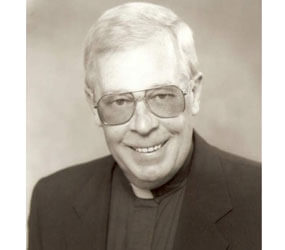 Father Edward B. Hemler, longtime pastor of St. Mark in Fallston and a former leader in Catholic education, died July 24 after suffering years of declining health. A 10:30 a.m. funeral Mass was to be celebrated at St. Mark July 28.

“He was always very concerned about his parish and had a great love for his people,” said Monsignor Thomas Tewes, a close friend who was to give the homily at Father Hemler’s funeral Mass.

“He had a great love for young people and had a good youth ministry program,” Monsignor Tewes said. “He was a very bright and intelligent man – very well-read.”

Monsignor Tewes said his friend was a “sign of courage” to his faith community as he dealt with a series of health challenges in recent years. Father Hemler underwent heart bypass surgery, artery bypass surgery and a leg amputation. In addition, the 74-year-old priest recently dealt with an aortic aneurism and tracheotomy.

“The last two years have been horrendous in going from one major sickness to the next,” Monsignor Tewes said. “He was a person who lived his faith to the fullest. He wasn’t afraid of death and he wasn’t a complainer. It was the hand the Lord dealt him, so he played it.”

Despite all his health problems and a fall that left him battered and bruised, Father Hemler was able to give first Communion to the children of St. Mark last spring. In a 2011 story about Father Hemler’s retirement, Bridgit Goedeke, St. Mark’s administrator of faith formation, told The Catholic Review she would never forget how the priest dispensed the sacrament from his wheelchair.

“It was simply the most amazing miracle,” she recalled. “I had moms say to me that no one ever did it the way he did. He met the children eye-to-eye. It was beautiful.”

Inspired by the priests of his home parish of St. Mark in Catonsville, Father Hemler entered St. Charles Minor Seminary in Catonsville as a teen before continuing his priestly studies at St. Mary’s Seminary on Paca Street and then Roland Park. He later earned a doctorate in education from The Catholic University of America in Washington, D.C.

Father Hemler’s early assignments included stints as associate pastor of St. Stephen in Bradshaw and religion teacher at The John Carroll School in Bel Air. He was the assistant superintendent of Catholic schools beginning in 1968, before moving to California in 1971 to serve as dean of studies at St. Patrick Seminary.
After four years in California, Father Hemler moved to Hawaii, working for seven years in administration with a community college and serving as a weekend associate at a Honolulu parish.

Father Hemler returned to the Baltimore archdiocese in the early 1980s, serving as associate pastor of St. Mark, Catonsville. He was named pastor of St. Anthony Shrine, Emmitsburg, in 1983, taking on an additional pastorate at Our Lady of Mount Carmel in Thurmont in 1987. He arrived at St. Mark, Fallston, in 1992 as associate pastor. He became pastor in 1997, overseeing the restoration of parish buildings.

“He empowered the people and the congregation to become more involved in ministries,” said Charlotte Henderson, St. Mark’s pastoral associate. “There’s a spirit of welcoming here – and a great part of that came from him.”

“He loved to go on cruises,” Monsignor Tewes recalled. “He would take a half dozen books with him. He was an avid reader.”

In a 2011 interview after moving into Mercy Ridge Retirement Community in Timonium, Father Hemler told The Catholic Review he “thoroughly enjoyed” every assignment he had.