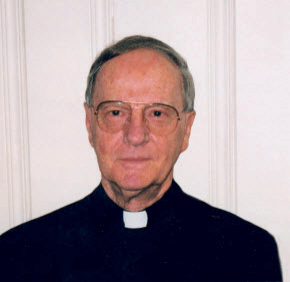 By Catholic Review Staff
A funeral Mass for Passionist Father Gerald Hynes will be offered April 23 at St. Ursula in Parkville. Father Hynes died April 16. He was 90.
A native Baltimorean, Father Hynes entered the Passioninsts in 1943 and was ordained in 1951. He conducted parish missions and retreats from 1952 to 1955.
Father Hynes served as associate pastor of St. Joseph’s Passionist Monastery in Irvington from 1955 to 1957 and returned there in 1961 to lead retreats and missions. He ministered at St. Joseph’s Passionist Monastery’s Spiritual Center from 1971 to 1980.
Father Hynes served as associate pastor of St. Charles Borromeo in Pikesville from 1981 to 1985 and at St. Ursula from 1985 until his death. He died at Stella Maris in Timonium.
“When Father Gerry preached about Jesus, it was an invitation to love as Jesus loved,” Passionist Brother Edward J. Hall said. “Father Gerry helped people to recognize the presence of Christ is there in their midst. In Father Gerry’s preaching of the Gospel, he changed lives by talking about the goodness of God.”
Below are the funeral arrangements:

Reception of the Body: