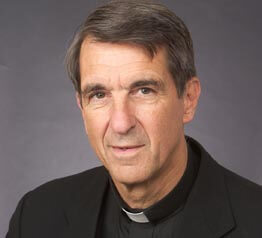 NAPLES, Fla. – A day after he was asked to resign his post as provost and leave the campus March 21, Jesuit Father Joseph Fessio agreed to continue to have a role at Ave Maria University, including teaching and serving as a theologian in residence.

A statement sent the evening of March 22 by the university’s public relations firm said Father Fessio accepted the school’s offer that he continue his relationship with Ave Maria in a nonadministrative capacity.

The university’s March 21 announcement that Father Fessio had been asked to resign as provost cited “irreconcilable differences over administrative policies and practices.”

Father Fessio, 66, had served as chancellor or provost of the Catholic university in Florida since its founding was announced in 2002. He also has continued to serve as editor of Ignatius Press, a San Francisco-based Catholic publishing company he founded in 1978.

Father Fessio told reporters from various publications that he was not given a reason for his dismissal. The university’s statement said, “There has never been any difference in our commitment to our mission or to the magisterium of the church. Nor is there any diminishment of our commitment to maintaining the highest quality of scholarship.”

The March 22 press release repeated that “the separation of Father Fessio from the university’s administration had nothing to do with our shared commitment to our mission as a Catholic university ‘ex corde ecclesiae.’“ The version of the press release posted on the university’s Web site was signed by Ave Maria President Nicholas J. Healy.

“Ex corde ecclesiae” means “from the heart of the church” and is also the title of Pope John Paul II’s 1990 apostolic constitution on Catholic higher education.

The statement said that, “as a sign of our esteem for his great gifts and abilities, we have asked Father Fessio and he has agreed to continue a relationship with us.”

Father Fessio will be designated a theologian in residence and maintain a room on campus, it said. He also will participate in commencement exercises, teach an already scheduled 2007 summer program for high school students, and in the spring 2008 semester will assume as-yet-undefined teaching responsibilities at the university.

In interviews with Florida daily newspapers, Father Fessio said he had no indication before the meeting in which he was dismissed that such an action was coming.

“I asked for a reason but was not given one,” the News-Press of Fort Myers quoted Father Fessio as saying.

As provost, Father Fessio had duties that involved overseeing the university’s academic functions.

In 2002, the priest’s Jesuit superiors cut short his involvement with another fledgling Catholic school, Campion College in San Francisco. The school, which has apparently closed, was to offer a two-year humanities program. It was started out of Ignatius Press to embody the spirit and curriculum of yet another school started by Father Fessio, the St. Ignatius Institute.

Ave Maria University was founded by Tom Monaghan, founder and former owner of Domino’s Pizza. The university in Florida opened in temporary quarters in 2003, with plans to move this summer to permanent buildings on a 5,000-acre site nearby, planned as a whole city with an oratory and the university as its center.

In 1998, Monaghan sold his pizza chain and donated some of the proceeds to the Ave Maria Institute, a two-year Catholic college in Ypsilanti, Mich. The school grew into the four-year Ave Maria College, which is now Ave Maria University.

The Monaghan-founded Ave Maria School of Law in Ann Arbor, Mich., which opened in 2000, announced in February it would move to Florida in 2009.