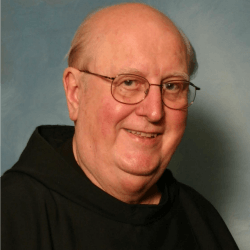 A funeral Mass for Conventual Franciscan Father Berard Dudek will be offered June 8 at 11 a.m. at St. Casimir Church in Baltimore. A Baltimore native who died June 4 at age 89, Father Dudek served three stints at the parish and had a number of other assignments in the Archdiocese of Baltimore.

Elsewhere in the archdiocese, he served as guardian and pastor of the former St. Stanislaus Kostka in Fells Point, 1976-82; associate pastor of the Basilica of the National Shrine of the Assumption of the Blessed Virgin Mary in Baltimore, 1982-84; a teacher at Archbishop Curley High School; 1983-84; and vicar provincial of the St. Anthony of Padua Province, 1985-88.

Retiring in 2005, he moved into the Franciscan Friary at St. Mary Clement Hofbauer in Rosedale, where the pastor was Conventual Franciscan Father Donald Grzymski, now the president of Archbishop Curley High School.

“It was a real pleasure to know Father Berard, and to share friary life with him,” Father Grzymski wrote in an email to the Review. “He was always a gentleman, interested in people on a one-to-one basis, and with an active mind to the end.

“We were together for nine years at St. Clement’s in Rosedale, and he was always most fraternal in offering counsel, encouragement, and an offer to assist as best he could. He saw the Good Shepherd as his model, and he truly was a shepherd in the varieties of ministries he had over a long life.”