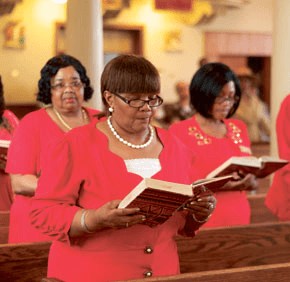 Ernestine Watkins has been a lifelong parishioner of St. Peter Claver because of the parish’s sense of family.

“For me, it’s the feeling of being home,” said Watkins, 54, the church’s volunteer director of religious education for youth. “I’ve been to other churches and other Masses and while they’re doing what we’re doing, it’s something about being with people you know and some people you don’t know. It’s a sense of belonging.”

St. Peter Claver and St. Pius V, which retain their own names and identities, have operated under one roof since St. Pius V’s church in Harlem Park was closed in 2005. The west Baltimore parishes, which are predominately African American, share the tagline “one in the spirit.”

Deborah Holly, another lifelong parishioner who has worked in the parish office since she was a teenager, called the community family-centric.

Holly called St. Peter Claver, which will celebrate its 125th anniversary next year, “a mission-driven parish because there’s so many needs.”

Josephite Father Ray P. Bomberger said there is a “sense of family and community” at the church.

“People put their heart into everything and that just comes across,” Father Bomberger said.

Nearly one year ago, a parish youth started liturgical dance at the church, which Father Bomberger described as “movement to music” that “livens up the liturgy.”

Two parish youths led liturgical dance at Mass May 13, which Holly called an expression of praise to God. The church also has four choirs.

Another church ministry was inspired by Josephite Father Henry Harper, a longtime associate pastor of St. Peter Claver who died in March 2011. Father Harper was known for ministering to the homeless for about 22 years.

In an effort to continue Father Harper’s ministry, parish youths started Harper’s Helpers, which works to clothe and feed the homeless, Father Bomberger said. Parishioners donate supplies and prepare and serve meals to the needy at the church.

“I think it comes from the whole neighborhood being a family,” Father Bomberger said.

“I don’t have to pull teeth,” Watkins said. The youths are in grades eight through 12.

“They come out on Friday night and, to me, that says something about our kids wanting to learn about their faith,” Watkins said. “It’s not a matter of forcing them – it’s where they want to be.”

The youth ministry group organized a Toys for Tots fashion show as a way to collect unwrapped toys for needy children at Christmas. It also collects and distributes blankets to Baltimore’s homeless, Watkins said.

The youths even bring their friends on occasion, which Watkins called “evangelizing in their own way.”