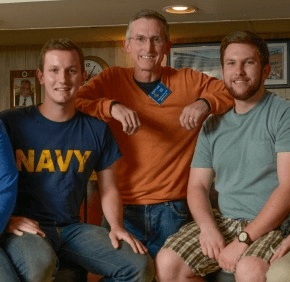 By Phil Turner
Special to the Review
CATONSVILLE – At least one Knights of Columbus council in the Archdiocese of Baltimore is changing the image of the Catholic fraternal organization.
In recruiting his four sons to Patapsco Council No. 1960, Scott Luco, its grand knight, has shown that while the Knights remain committed to service, they are younger than you think.
Luco initially joined the Knights for one reason: insurance. They offer life insurance to members and manage  $21 billion in assets, making them one of the largest insurers in  North America.
When he joined the Patapsco Council after relocating his family back to Maryland from Tennessee, Luco was its youngest member and said he “felt called to save a dying council.”

Since he became grand knight in 2014, the council has grown to 400 members; more than 60 are active. His tenure as grand knight ends June 30, and he is confident of the council’s future, thanks to the new blood represented by his sons.
Scott and Anne Luco instilled a sense of service in their sons – Steven, 27, Jacob, 26, William, 22, and David, 18. That was reinforced by their years in the Boys Scouts of America – all are Eagle Scouts – which translated well to the missions of the Knights of Columbus.
Jacob, who, along with William and David, is a graduate of nearby Mount St. Joseph High School, looks at his involvement with the Knights, which ranges from Easter egg hunts for young children to moving furniture for the elderly, as a satisfying opportunity.
“We all have talents,” he said. “This is an opportunity to use those talents to serve. It provides fulfillment and a sense of usefulness.”
Their father admits that a common picture many have of the Knights is one of “old men drinking beer,” but a brief look around his hall on a Friday night changes that perception.
Men and women, young and old, join the council’s festivities, which includes an affordable dinner and simple socializing between people of all ages. One aspect he loves most about his family’s involvement is that the most tenured Knight and the least tenured can come together and talk as equals.
“Everyone, regardless of seniority, is expected to help anyone else,” Stephen said of the council. “Everyone in it is looking out for everyone else.”
David, the council’s youngest member, attends UMBC, where he says he’s “always encouraging other young men to join.”
The Knights welcome Catholic men 18 and older. They have taken to social media to reach out to younger crowds, and the banner of the Patapsco Council’s Facebook page reads “Join Us.”
The council carries a high profile at the annual Catonsville Fourth of July Parade, as Scott said its hall serves as “Parade Central.” The Knights provide garbage cans for the entire parade route, open their hall to the public and lend their coveted vantage point on Frederick Road to the parade judges.
“It’s the best seat in the house,” said the proud father.
See also:
Special needs ministries, blessings all around
Father Rubeling’s priestly ordination is a family affair
PrevNext