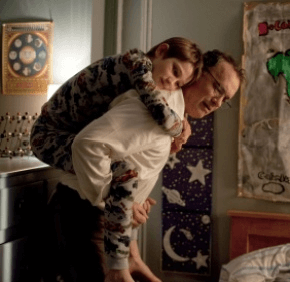 NEW YORK – Few events in recent history have exerted as deeply personal an impact on the lives of millions of Americans, and of people across the globe, as the attacks of 9/11.

So it’s odd and a little baffling that a film based on our national tragedy of a decade ago should register – for most of its two-hour-plus running time, at least – as uninvolving.

Yet such is the case with “Extremely Loud & Incredibly Close” (Warner Bros.), director Stephen Daldry’s grim screen version of the best-selling novel by Jonathan Safran Foer. Though his drama focuses on community, shared suffering and familial solidarity, and upholds positive, humanistic values, various factors within it seem to conspire to keep the audience at a distance.

To begin with, there’s the eccentric personality of the movie’s main character, introverted grade schooler Oskar Schell. While newcomer Thomas Horn does an admirable job of inhabiting Oskar, this young Manhattanite is anything but an Everyman – or perhaps Everyboy.

Oskar may or may not have the mild form of autism known as Asperger’s syndrome; tests, he tells us at one point, were inconclusive. But he is undeniably pan-phobic, and the only thing that seems to soothe him – as he runs the gauntlet of such fear-inducing elements of New York life as subways, elevators and loud noises – is his ever-present tambourine.

Of course, Oskar has more reason to be fearful than most, given that his devoted father, Thomas (Tom Hanks), perished in the World Trade Center.

Devastated by his sudden loss, Oskar seeks diversion, as well as a prolonged sense of closeness to his dad, in an unusual quest. He’s out to identify the purpose of a mysterious key he discovered among Thomas’ belongings.
His search gains him the friendship of the traumatized German immigrant (Max von Sydow) who lodges with his grandmother. And it ultimately brings him closer to his seemingly grief-paralyzed mom, Linda (Sandra Bullock).

But the diffuse nature of his journey, which brings him into contact with a whole series of strangers – including, among others, a sympathetic transvestite – is another alienating, or at least distracting element for viewers.

While not suitable for Oskar’s real-life peers, his story is presented in a way that most adults will find acceptable, a few rude puns exchanged with his building’s doorman Stan (John Goodman) notwithstanding. But, as scripted by Eric Roth, his tale is likely to prove more emotionally trying than genuinely cathartic.

The film contains mature themes, some disturbing images, a transvestite character, a couple of crude terms and occasional vulgar wordplay. The Catholic News Service classification is A-III – adults. The Motion Picture Association of America rating is PG-13 – parents strongly cautioned. Some material may be inappropriate for children under 13.