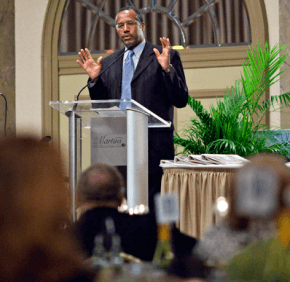 WOODLAWN – Dr. Benjamin Carson remembers meeting with a couple years ago who were expecting a baby and contemplating abortion after learning their child was going to born with special needs.

Years later, Carson said a young man approached him on a college campus and thanked him: that baby was his sister, who lived to the age of 15.

“A person’s life is the most precious thing you are dealing with,” Carson said. “There are no lives worth throwing away.”

Carson, director of pediatric neurosurgery at Johns Hopkins Hospital and the 2008 recipient of the Presidential Medal of Freedom, rallied nearly 300 people at The Maryland Right to Life banquet May 10 at Martin’s West and urged them to stick to their principles and be persistent in the pro-life movement.

“We have a responsibility to place forth logical and reasonable arguments that reasonable people can comprehend and grasp,” said Carson, who said he hasn’t always been pro-life.

Carson, who also serves as co-director of The Johns Hopkins Craniofacial Center and professor of neurosurgery, oncology, plastic surgery and pediatrics, urged those in the audience not to compromise their principles because of political correctness and the “gradual erosion of our values.”

He is hopeful that the opinions of people who aren’t pro-life will evolve over time.

“Perhaps they haven’t thoroughly thought through the position,” said Carson, who referenced abolitionists who worked to end slavery.

Believing that every life is precious, Carson said an aborted fetus could have been a child that would grow up to cure cancer or devise an invention.

“The very thought of it defies logic,” Carson said.

Persistence is “what will win the day for us,” said Carson, who likened the dedication of pro-life people to American soldiers defending Baltimore and the United States during the War of 1812.

“We must be determined that we can live up to that creed,” Carson said, “that we can say we live in one nation, under God, indivisible with liberty and justice for all.”