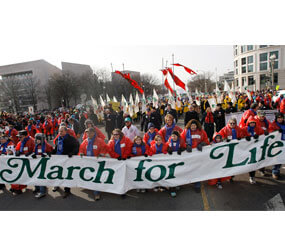 WASHINGTON – One thing that always stands out in the annual marches and rallies in Washington and across the country marking the anniversary of the U.S. Supreme Court’s decision legalizing abortion is the crowd.

“People are always surprised by the number of pro-lifers that show up in Washington and in their own state capitals,” said Carol Tobias, president of the National Right to Life Committee.

“The crowds are getting bigger and bigger each year and have more young people, which is encouraging for the pro-life movement and a shock for those who think abortion should remain legal,” she told Catholic News Service Jan. 4.

And based on expected turnouts, this year will be no exception.

Tens of thousands of people from across the United States are expected to gather in the nation’s capital Jan. 23 for this year’s March for Life in Washington with the theme: “Unite on the life principles to overturn Roe v. Wade and with love protect mothers and preborn children – no exception, no compromise.”

The event falls on a Monday, the day after the 39th anniversary of the Roe v. Wade decision, to allow participants to visit their representatives on Capitol Hill after a noon rally on the National Mall and a march along Constitution Avenue to the Supreme Court.

Next year’s march and rally in Washington is slated for Friday Jan. 25 because the Jan. 22 anniversary will fall on a Tuesday, the day after public ceremonies for the presidential inauguration, and organizers said they were not able to secure an adequate number of hotel rooms.

The night before this year’s rally, March for Life organizers are planning a mini-rally in Lafayette Park across from the White House. They are also sponsoring a youth rally that night at a Washington hotel.

A capacity crowd of about 20,000 pilgrims is expected to fill the Basilica of the National Shrine of the Immaculate Conception for the annual National Prayer Vigil for Life, which begins with a Jan. 22 vigil Mass. Cardinal Daniel N. DiNardo of Galveston-Houston, chairman of the Committee on Pro-Life Activities for the U.S. Conference of Catholic Bishops, will be the principal celebrant and homilist.

For the 16th year, the Archdiocese of Washington will sponsor its annual pro-life youth Mass and rally the morning of Jan. 23. The popularity of the event prompted the archdiocese to hold this event in two sports venues last year- the Verizon Center and the D.C. Armory – to accommodate a crowd totaling about 28,000.

The event includes a concert, confessions, praying the rosary, and Mass, before most of the crowd heads to the annual March for Life.

After the March for Life the rallying-spirit will continue with several pro-life organizations sponsoring the National Pro-Life Youth Rally near the Supreme Court.

Other Washington events related to the Roe anniversary include the Cardinal O’Connor Conference on Life at Jesuit-run Georgetown University Jan. 22 for college and high school students featuring a keynote address by Philadelphia Cardinal Charles J. Chaput; two Rock for Life concerts – Jan. 21 and 22; speeches at the Supreme Court during the march sponsored by the Silent No More Awareness Campaign; and a Jan. 23 Mass at St. Aloysius Church in Washington sponsored by the Ignatian Pro-Life Network, a union of pro-life groups from Jesuit high schools, colleges universities and parishes.

Although Washington draws the biggest crowd making a stand against legalized abortion, similar events take place on a smaller scale across the country.

For the eighth year, the West Coast Walk for Life expects to draw thousands of pro-life supporters to San Francisco Jan. 21. Thousands more people around the country will attend local events sponsored by their dioceses and pro-life organizations.

For the second year, the Midwest March for Life will hold a banquet dinner Jan. 18 and a march and rally the next day in Jefferson City, Mo., the state capital.

“We feel the Midwest is ripe for a huge event,” said Kathy Forck, coordinator of Columbia (Mo.) 40 Days for Life, a local group that is part of a national campaign to end abortion. Forck hoped this year’s turnout would exceed last year’s, especially since the March for Life in Washington and the West Coast Walk draw so many participants.

Tobias, who began her term as National Right to Life president last April, said a number of the state rallies this year will likely focus on new legislation passed in five states that prohibits abortions after the 20th week of pregnancy, the stage of development when a fetus is said to feel pain.

Fetal pain legislation passed in Nebraska in 2010 and in Idaho, Kansas, Oklahoma and Alabama last year.