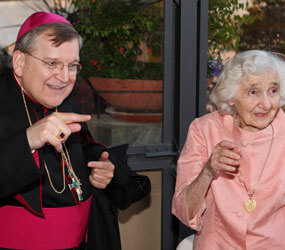 VATICAN CITY – “The universality of the church,” proclaimed the headline across the top of the Vatican newspaper, as it announced Pope Benedict XVI’s choice of 24 new cardinals from 13 different countries.

Yet those expecting the cardinal selections to further globalize the College of Cardinals were no doubt disappointed. Fifteen of the 24 new cardinals are European; 10 are from Italy; and 14 are current or former officials of the Roman Curia.

Instead of expanding the geographical reach of the college, the pope appeared to be pulling it back to its historical base in Rome and Europe.

Europeans will now make up a majority of voters in a potential conclave, with 62 of the 121 cardinals under the age of 80. Roman Curia officials will comprise a full 30 percent of the cardinal-voters.

The nomination of so many Europeans and Italians this time around did not surprise close Vatican observers. Over the past three years, Pope Benedict has named more than 10 European prelates to Vatican positions that often bring a red hat, and those expectations came due this fall.

As a result, many heads of archdioceses around the world are still waiting – and may wait a long time. In this batch of nominees, the most striking aspect was that only 10 were residential archbishops: three from Europe, three from Africa, two from Latin America, one from North America and one from Asia.

The Roman Curia grows a recurrent crop of potential cardinals, and that’s not going to change anytime soon. Three heads of Vatican agencies might conceivably be made cardinals the next time around. In addition, five Roman Curia cardinals will reach retirement age over the next year, and their replacements will also be standing in line for the red hat.

For years, Pope John Paul II slowly shifted the geographical balance in the College of Cardinals, naming more cardinals from “younger” church communities in Africa and Asia. Quite often he passed over Vatican officials whose job descriptions didn’t require them to be cardinals.

With his latest nominations, Pope Benedict seems to be going in the opposite direction.

The crux of the issue is the current limit of 120 cardinals who are under age 80 and therefore eligible to vote in a conclave. That’s something the pope could easily change, if he wanted to.

For centuries, the College of Cardinals had a limit of 70 members, and all had a vote in a conclave. It was Pope John XXIII who began to raise the number of cardinals, a trend that has continued with every successive pope.

Pope Paul VI established the maximum of 120 electors, all of whom were to be under age 80. However, the 120 limit has been set aside several times – Pope John Paul II went way over in 2003 with 135 voting-age cardinals; Pope Benedict will exceed the maximum by one this time around.

The pope could do away with the numerical ceiling of 120 with the stroke of a pen, and thus open up many more cardinal positions. This would create room for a much greater number of residential archbishops, and allow the pope to elevate prelates in places where the church is growing but has not traditionally had a cardinal.

Expanding the number of voting-age cardinals would likely be seen as giving more equal representation to Catholic populations around the world, and as correcting existing imbalances. To cite just one example, Italy currently has 25 voting-age cardinals, a number greater than the total of every continent except Europe.

Yet that kind of reasoning may be the biggest reason Pope Benedict is not eager to break the paradigm when it comes to the College of Cardinals. He does not want to make any move that suggests this body is a kind of church “parliament” where seats are allotted by population, or where cardinals are seen as representing the interests of their constituent Catholic communities.

The pope has described the College of Cardinals as the church’s “Senate,” but not a political one. In 2007, addressing participants in his second consistory, he highlighted the college’s geographical diversity but said its role above all was to promote unity with the bishop of Rome. Its actions, he added, should reflect “humble self-giving” and not the search for power or domination.

Pope Benedict will have named 40 percent of potential cardinal electors after the Nov. 20 consistory. Over the next three years, he would have the opportunity to name at least 32 more. When that happens, the pope will have left his definitive mark on a future conclave, having named more than two-thirds of the cardinals who will choose his successor.