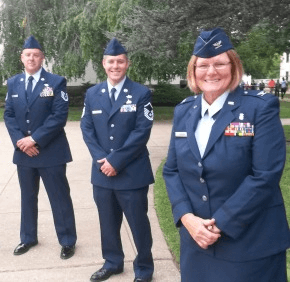 pmcmullen@CatholicReview.org
Twitter: @ReviewMcMullen
ESSEX – Red, white and blue drowned out purple Sept. 11 at Our Lady of Mount Carmel.
Ravens’ jerseys regularly dot the pews of the Essex church, especially on momentous Sundays such as their season opener. Its rhythm, however, also includes weekly intercessions for military and first responders, so it was natural for the parish to solemnly observe the 15th anniversary of the 9/11 terrorist attacks with a Memorial Mass.
Cynthia Islin, the cantor for the 10 a.m. Mass, wore her U.S. Air Force uniform. Retired from the Air National Guard, she was joined in uniform by her husband, Delta Airlines pilot Nick Islin; other active and retired military; and Baltimore County police officers and firefighters.
Engine 16 was parked on the driveway off Old Eastern Avenue, where Fire Apparatus Driver Operator David J. Oliver explained its significance.
“When the Ravens and New York Giants played in Super Bowl XXXV (in January 2001), Engine 16 in midtown Manhattan called to make a friendly bet of t-shirts with us,” he explained. “When we went to collect, they treated us like kings, showed us the town.”
Seven months later, the rolls of that station were obliterated as the Twin Towers went down in lower Manhattan.
“Every one of those guys died in 9/11, with one exception,” Oliver said. “We went to a half-dozen funerals. They needed people there, because everyone else was gone.”

Retired from the Air National Guard, Cynthia Islin wore her U.S. Air Force uniform to 10 a.m. Mass Sept. 11 at Our Lady of Mount Carmel in Essex, where the parishioner and Bowleys Quarters resident served as cantor. The Memorial Mass was held on the 15th anniversary of the 9/11 terrorist attacks on the United States. (Courtesy Kay LaHatte)

A veteran of 27 years of service to the county, Oliver was invited to join the observance by Kay LaHatte, a longtime friend of his mother’s. LaHatte and Linda Cole are among the members of the parish liturgy committee, which organized the Memorial Mass.
It included separate intercessions for the victims who died at the Twin Towers, the Pentagon and in Shanksville, Pa., with corresponding candles on the altar lit in succession by Nick Rose, Clare Oshman and Aby Friesl, students, respectively, in the 11th, seventh and third grades at Our Lady of Mount Carmel School.
The gifts were presented by men and women in uniform.
Monsignor Robert L. Hartnett, pastor, was the celebrant, joined by Father Patrick Besel, associate pastor. In a forceful homily, Monsignor Hartnett related the response to the 9/11 tragedy to the Parable of the Lost Sheep told in the day’s Gospel, Luke 15:1-32.
“There are thousands of stories about 9/11,” he said. “I just read one about any boat of significance going to Manhattan, where in a little over 8 hours, they moved 500,000 people to safety.
“The people on that rescue mission did not ask, ‘Are you a Democrat or a Republican?’ They did not ask, ‘Are you white or black or something in between?’ They did not ask, ‘Are you straight?’ They simply didn’t want to leave anyone behind. Anyone who was in danger was helped.”
He referenced the nation’s origins.
“Somewhere in our practice is imbued this ideal, that we care for others,” he said. “We don’t want to leave others behind in moments of tragedy. … Oh, that we could hold on to that.”
He then made a nod to the men and women in uniform in attendance.
“We leave the 99 to find the one,” Monsignor Hartnett said. “There is more than one out there who is lost, living outside the system, who needs to be cared for.
“That’s why our people gave their lives not just on 9/11, but every day, military, police, firefighters, nurses. They put their life on the line for people they don’t know. There are 9/11s happening every day on a smaller scale. We do not leave others behind.”
Rita Kurek attended in her Air National Guard uniform. She’s served Our Lady of Mount Carmel as school board president and a member of the choir, and together with her husband, Michael Butler, teaches marriage preparation.
“I belong to the parish, and it’s important that we honor the memory of all those who fell on 9/11,”  said Kurek, a colonel in the Maryland Air National Guard’s 175th Medical Group. “We’ve posted colors for other events, and we always do a service on Veterans Day. This isn’t anything new here.”

Read a story and watch a video interview with Cardinal Edwin F. O’Brien on his memories of the 9/11 attacks

Editor’s Note: Paul McMullen is a parishioner of Our Lady of Mount Carmel.