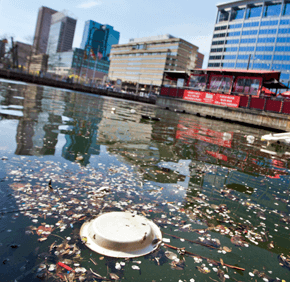 By Maria Wiering
mwiering@CatholicReview.org
Baltimore City and some Baltimore County Catholic parishes are eligible to participate in a new green initiative to reduce stormwater runoff and enhance their communities’ commitment to environmental stewardship.
Blue Water Baltimore and Interfaith Partners for the Chesapeake are leading a three-year program for religious congregations. The program launched at St. Matthew in Northwood March 30 with a forum called “Walk the Talk: An Interfaith Response to Polluted Runoff.”
The initiative involves efforts to reduce stormwater remediation fees or “rain tax,” which Maryland’s 10 largest jurisdictions began collecting from property owners last year.
“Congregations are taken aback by the stormwater utility fee, so this was a great opportunity to explain to them where this is coming from and how it fits in with our belief system, as people of faith called by God or our creator to care for creation,” said IPC executive director Jodi Rose.
Rose hopes the conversation around the stormwater fees can rise beyond their costs to the religious significance of environmental projection.
The program is divided into two tracts. Congregations in both tracts receive technical and grant-writing support from Blue Water Baltimore, an organization dedicated to restoring the quality of Baltimore’s waterways. One tract will work closely with Blue Water Baltimore and focus on shovel-ready projects to mitigate polluted stormwater runoff. The other will work with Annapolis-based IPC to set goals for stormwater runoff reduction and other environmental stewardship projects while attracting community stakeholders’ involvement.
Congregations will explore runoff-reducing projects such as water-permeable pavement, rain barrels and rain gardens. The program is funded by a grant from the National Fish and Wildlife Foundation and designed to involve 84 congregations over the three years.
St. Matthew is among the congregations that have committed to working with IPC, Rose said. St. Matthew leaders could not be reached for comment.
Newly interested parishes are encouraged to apply to begin the program in the fall, Rose added.
To be eligible, congregations must be located within the Gwynns Falls, Jones Falls, Herring Run and Baltimore Harbor watersheds.
The Maryland General Assembly passed a bill in 2012 mandating nine counties and Baltimore City to collect fees for stormwater runoff. Each jurisdiction assessed the fee differently. Most are based on units of impervious surface area, such as parking lots and rooftops. Most jurisdictions reduced the fee for nonprofits or religious organizations.
Some religious leaders, including the Maryland Catholic Conference, have argued that the fees are still too high in some jurisdictions, especially Baltimore City where some parishes expect to spend thousands of dollars on the fees annually. The fees also affect Catholic schools, hospitals and other faith-based organizations.
The fees are part of the state’s efforts to comply with federal legislation regulating pollution in waterways, including the Chesapeake Bay.
The Catholic Review previously reported the that MCC, which works on public policy on behalf of the state’s bishops, is supportive of measures to reduce stormwater runoff and protect the bay, but wants the fees not to impose a significant financial burden on religious and nonprofit organizations.
Like Catholic leaders before him, Pope Francis has called for greater environmental stewardship.
“Nature, in a word, is at our disposition and we are called to exercise a responsible stewardship over it,” he said Jan. 1 in his message for the World Day of Peace. “Yet so often we are driven by greed and by the arrogance of dominion, possession, manipulation and exploitation; we do not preserve nature; nor do we respect it or consider it a gracious gift which we must care for and set at the service of our brothers and sisters, including future generations.”
For more information, visit bluewaterbaltiomre.org/blue-water-congregations and interfaithchesapeake.org.
Has your parish reduced its stormwater fee?
Baltimore City parishes must apply to have their stormwater fees assessed at the lower rate for religious organizations. Interfaith Partners for the Chesapeake encourage them to check their water bills to ensure they have received their religious structure fee reduction. According to the ICP, the reduced fee is $3 per ERU (equivalent residential unit) per quarter for structures used only for worship or kindergarten-to-grade-12 education. If the fee has not been reduced, parishes can apply for the reduction by submitting a map of the property with proof of tax exempt status. Visit cleanwaterbaltimore.org for more information.
Also see:
In streets of Little Italy, St. Leo parishioners remember Christ’s sacrifice
Mom from Millersville among 750 new Catholics in Archdiocese of Baltimore
PrevNext