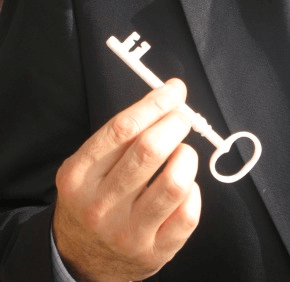 EMMITSBURG – Focused as she was on serving Jesus Christ as she found him among the poor, the uneducated and the sick, it’s unlikely that fantasies of posthumous fame – true as they would have been – ever entered the head of St. Elizabeth Ann Seton.

Even more unlikely is that she would have ever thought that some benign object in her possession – a house key, for example – would one day serve as a gift, from the leader of the free world to the Vicar of Christ.

On Sept. 23, President Barack Obama presented Pope Francis with one of two keys to the Stone House, St. Elizabeth Ann Seton’s first residence in Emmitsburg and the structure from which she started her religious order, the Sisters of Charity of St. Joseph’s.

“We were just very honored to be part of a gift given to the Holy Father,” said Rob Judge, executive director of the National Shrine of St. Elizabeth Ann Seton.

The key was presented on a piece of marble taken from the basilica where the saint’s body is entombed.

U.S. President Barack Obama presents a gift to Pope Francis during his visit to the White House in Washington Sept. 23. The gift was one of the two original keys from the 1809 home in Emmitsburg, Md., of Mother Elizabeth Ann Seton, the first American canonized a saint. (CNS photo/L’Osservatore Romano)

According to Judge, federal officials with the State Department approached the shrine several months before Pope Francis’ visit to the U.S. about obtaining an artifact connected to the first native-born American to be named a saint.

“They knew a ton about Mother Seton,” Judge said. “They knew that her sisters served the poor and that whole connection of her charism of charity to Pope Francis.”

The shrine helped the federal officials identify a suitable artifact.

“They wouldn’t have known right away to ask for any one thing,” Judge said.

Due to its size, heft and symbolism, a key to the Stone House seemed the ideal gift.

“One of the things that gave us confidence was that we had two of them,” Judge explained.

The remaining key is in a glass display case at the shrine museum, with an explanation of the historic gift exchange.

The key given to Pope Francis was the smaller of the two skeleton keys to the Stone House.

“They liked it because it had a cross,” Judge explained, displaying a 3-D-printed replica of the gift key, the bit of which has a cross-shaped notch.

Though the key dates to 1809, the year St. Elizabeth Ann Seton moved to Emmitsburg, and unlocked a door in her home, it cannot be definitively placed in her hand.

“As Catholics, we know that it’s a second class relic if she touched it,” Judge said.

With the key, Pope Francis received a card explaining its significance to his papacy: “This gift celebrates St. Elizabeth Ann Seton’s and your dedication to opening doors for those who are poor, sick or underserved.”

The gift also honors the pope’s designation of 2015 as the Year of Consecrated Life; the Sisters of Charity of St. Joseph’s were the first new community of women religious in the U.S., as the gift card also noted.

In 1850, the Sisters of Charity community in Emmitsburg became the American province of the Daughters of Charity, the order whose Vincentian Rule St. Elizabeth Ann Seton used as a model for her own.

The key had been displayed in the shrine museum and was part of an archive curated by the Daughters of Charity before it was donated to the federal government.

Judge said that he and others involved had to plan the transaction secretly to avoid spoiling the surprise.

Daughters of Charity Sister Clare Marie Angermaier, said “everybody was awed” by the idea that the key would be given to the pope.

“It was totally unexpected,” she said.

Sister Clare Marie called the pope’s visit “a shot in the arm of all the Catholics in the country, and the non-Catholics who just see him as a good person.”

He can come back anytime, she added, “now that he has his own key.”