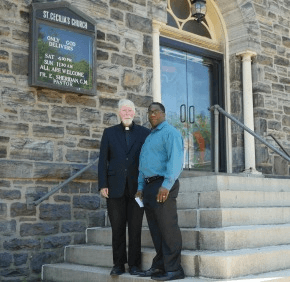 The late-April unrest in Baltimore following the funeral of Freddie Gray Jr. has sparked a nationwide conversation on race, poverty and urban life, but many Catholic parishes, including St. Joseph in Emmitsburg, have done more than talk.

The weekend after the riots, the parish – located 60 miles outside the thick of things in the shadow of the bucolic Catoctin Mountains – collected $3,242 to help a West Baltimore mother and son who lost everything when a liquor store fire spread to their home, near the corner of Piedmont Avenue and N. Hilton Street.

The 7-year-old son is disabled and lost his wheelchair.

“People here are very generous when they know there is a specific need,” said Vincentian Father John Holliday, pastor of St. Joseph.

He added that the collection had been announced at the last minute.

A serendipitous convergence of personalities and knowledge led to this particular need being addressed.

Father Holliday is a member of the same religious order as Vincentian Father Eugene Sheridan, pastor of St. Cecilia, located at 3301 Windsor Ave., just a few blocks south of the burned residence belonging to the mother and son.

Father Sheridan happened to be visiting the Emmitsburg Vincentians the night of the rioting.

“I saw most of the looting and burning on television,” he said.

After the priest had made his way back to Baltimore, he turned on the TV again, and one of his parishioners, veteran WBAL reporter Barry Simms, was reporting from the scene of the residence fire.

“I walked over there,” Father Sheridan said.

He wasn’t the only one.

According to Simms, who said he has been a parishioner at St. Cecilia “forever,” several residents approached who wanted to help the woman, who did not wish to be identified, and her son.

“While I was standing out there talking, four people came up with wheelchairs,” Simms said. “Another guy came up to us and gave her $100.”

Simms insists that he was only reporting on the incident and had no idea that people would react the way they did.

The woman didn’t either.

“She saw the wheelchairs, and the seven or eight people standing there, and she basically just broke down crying,” Simms remembered, noting that he wasn’t sure if any of the wheelchairs suited the boy’s specific needs.

That wasn’t the point.

“She just broke down because of the support shown to her by people who didn’t even know her,” he said.

“I really don’t know what to think,” the mother told The Catholic Review. “We’re pretty good; the best thing is that we are alive.”

She and her son are staying with her mother for the time being; their building was condemned.

While the immediate material aid from St. Joseph parishioners and others will undoubtedly improve the woman and her son’s future prospects, Father Holliday also recognizes the value of conversation.

“Racism is a difficult subject to talk about,” he said, “but we’re hoping to do some talking, open some minds, and get some understanding of what’s going on in the country right now.”

St. Joseph is hosting a five-session study and discussion on race and the Catholic Church over five consecutive Sunday evenings in its parish hall. The final three sessions are May 31, June 7 and June 14, 6-7:30 p.m., at 100 N. Seton Ave. in Emmitsburg.

Feeding the discussion is a pastoral letter by Bishop Edward K. Braxton of the Diocese of Belleville, Ill., entitled: “The Racial Divide in the United States: A Reflection for the World Day of Peace 2015.” The letter, with analysis and discussion questions, is available at diobelle.org.

In addition to racial issues as they pertain to the church, Bishop Braxton touches on some of the recent violent deaths of black Americans, including Trayvon Martin, Eric Garner and Michael Brown. The letter was published prior to the death of Freddie Gray Jr.

Discussions are being facilitated by Father Holliday and Timothy Wolfe, director of the human services program and associate professor of sociology at Mount St. Mary’s University in Emmitsburg. Wolfe participated on a march on Baltimore City Hall on April 25, two days prior to the riots.