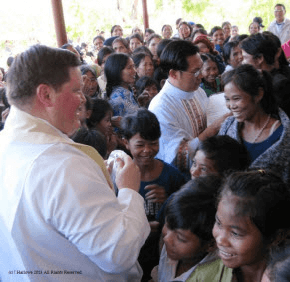 By Maria Wiering
mwiering@gmail.com
Twitter: @ReviewWiering
ELLICOTT CITY – When Father Matthew T. Buening tells people he went on a mission trip to Vietnam, they ask what he built.
His answer: a relationship.
“Sharing watermelon and tea was more important than building a new church for them, and it meant more to them, too,” said Father Buening, pastor of St. Paul.
From April 8 to 18, Father Buening traveled with parishioner Jerry Harlowe to the Diocese of Kontum in Vietnam’s central highlands. They spent five days in the HaMoong villages of an often-overlooked region of the country, where one priest serves four churches and about 5,000 people.
In 2009, St. Paul raised funds for an order of religious sisters serving the community to rebuild a residence and orphanage. The resulting building was named the Dream House, and launched a relationship between St. Paul and the HaMoong villages. The April trip was Father Buening’s first visit to what he now considers St. Paul’s sister parish, halfway around the world.
The people there are “dirt poor – dirt with a capitol ‘D,’” said Harlowe, who said he has traveled to Vietnam to do charity work about 30 times since 2001.
The HaMoong Catholics are members of Vietnam’s ethic minorities and victims of discrimination. Farmers by trade, they used to live in a fertile valley region, but the government relocated them about six years ago to a deforested mountainous area, Harlowe said. The move caused many to lose their livelihood.
Harlowe feels called to be with Vietnam’s people, he said. A former Air Force sergeant, he served in Vietnam during the war, from 1968 to 1970. His charitable work in the country inspired St. Paul to support the Dream House, after he discovered excessive termite damage undermining the building’s predecessor.
In his visits, Harlowe has built a network of friends, and he and Father Buening spent their evenings with families he knows. Their trip included a visit to the leprosy village of Dak Kia, south of Kontum, and a center for people with disabilities near the city.
Father Buening said he was inspired by his parish’s patron, the apostle Paul, who evangelized throughout the Mediterranean in the first century.
“We want to challenge ourselves to be like our patron, and not just go to neighboring communities, but go around the world,” he said.
Father Buening was struck by the country’s lack of religious freedom. The county’s Catholics – 6.7 percent of the population, according to the CIA World Factbook – are free to worship, but the government restricts evangelization activities, Father Buening said Kontum’s bishop, Michel Hoang Ðúc Oanh, told him.
Introduced by Jesuit missionaries in the 1600s, the Catholic faith spread in Vietnam through the witness of hundreds of thousands of Christian martyrs from the 17th to 20th centuries. Today the persecution takes the form of lies, the bishop told Father Buening. That persecution is part of what inspired St. Paul’s Church to reach out to Vietnam’s Catholics.
Public messages championing communism broadcast daily via loudspeakers, and, at least during Father Buening’s trip, they contained anti-Catholic rhetoric, he said.
St. Paul plans to continue financial assistance for the churches, including funding a nurse who visits the HaMoong villages twice a month.
Father Buening hopes his trip is just the first of many for his parishioners, and that the HaMoong community’s pastor, Father Joseph Houng, will be able to visit St. Paul as soon as October.
Also see:
Ellicott City parish a refuge after recent tragedies
Copyright (c) April 29, 2013 CatholicReview.org
PrevNext