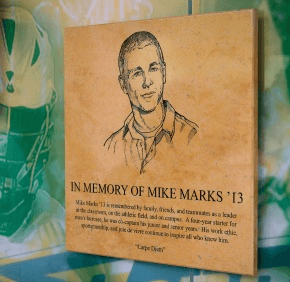 By Phil Turner
Special to the Review
Joseph and Barbara Marks were looking for a way to remember the contributions of their son, Mike, to McDaniel College, and placing his name on the scoreboard at Kenneth R. Gill Stadium in Westminster seemed apropos.
“Mike lit up every room he ever walked into,” his mother said. “We thought it was fitting to have his scoreboard light up the field.”
Two weeks after Mike Marks graduated from McDaniel in 2013, he died in an auto accident. On Sept. 17, a new scoreboard bearing his name was dedicated, thanks to a $150,000 gift from his parents.
The Marks family worships at Our Lady of Perpetual Help in Ellicott City. Mike attended its parish school, where the Mike Marks Team Player Award is given to the eighth-grader who best exemplifies a team-first attitude.
His athletic prowess was evident in kindergarten, when he began playing lacrosse and football. So was his zeal, as his father, Joe, described hits he made on the lacrosse field at 5-years-old as “perfectly legal, but much too intense for many of the other parents.”

Mike went to St. Vincent Pallotti High School in Laurel, where he was a four-year varsity starter in football and lacrosse. His parents also honored his legacy there, as its concussion protocol is known as the Mike Marks Impact Testing Program.
He entered McDaniel College in 2009, and was captain of the lacrosse team his junior and senior years. He graduated cum laude as a double major in International Studies and French, and had planned to obtain a master’s degree from American University in International Conflict Resolution.
“He really wanted to make a difference in the world,” his mother said.
His father noted his impromptu, albeit effective, way of evangelizing.
“At McDaniel, he often needed rides to church,” Joe Marks said. “The students he would get to give him rides would stay at Mass with him. Then, before you knew it, they were staying because they wanted to stay, and had made going to Mass their own habit. I received calls from the parents of other students thanking me for Mike bringing their children to the church.”
“He was a faithful Catholic who really lived his faith,” Barbara Marks added.

She said that he carried a favorite quote, by Jesuit Father Pedro Arrupe, the Spaniard who was the 28th superior general of the Society of Jesus.
“Nothing,” it reads, “is more practical than finding God, that is falling in love in a quite absolute, final way. What you are in love with, what seizes your imagination, will affect everything. It will decide what will get you out of bed in the morning, what you do with your evenings, how you spend your weekends,what you read, who you know, what breaks your heart, and what amazes you with joy and gratitude. Fall in love, stay in love, and it will decide everything.”
Barbara Marks noted the practical aspect of the scoreboard, which can be used for all sports played at Gill Stadium. The previous scoreboard was designed only for football.

Marian shrine in Ellicott City moves on after flood, with help from Baltimore firm