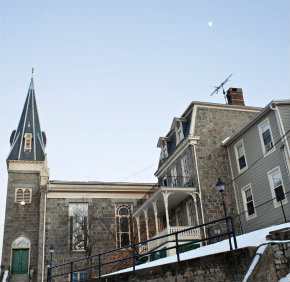 By George P. Matysek Jr.
gmatysek@CatholicReview.org
Almost exactly 175 years after the first Mass was celebrated at St. Paul in Ellicott City, parishioners gathered Dec. 15 to mark the special anniversary in the same prayerful way.
Bishop Mitchell T. Rozanski celebrated a special 11:30 a.m. anniversary Mass, which was followed by a reception and the unveiling of artwork that traces the faith community’s long history.
Jerry Harlowe, parish historian, noted that a 150-year-old painting of Bernard U. Campbell, one of the founding parishioners (possibly the founding parishioner), was displayed during the Mass. The oil painting was donated to St. Paul by family members in Connecticut.
Here are some highlights from an official history of the parish:
* Dedicated on Dec. 13, 1838, St. Paul was the only Catholic Church between Baltimore and Frederick at the time.
* St. Paul was built on land acquired from George Ellicott, an early settler in the region.
* During the Civil War, the basement of the church served as a hospital for both Union and Confederate soldiers.
* A parish school opened in 1922. Today, it operates as an inter-parish school known as Resurrection-St. Paul School.
* The Center for the New Evangelization opened in 2011. It features a “green roof” and is meant to serve as a center for the faith formation of young and old alike.
Also see:
Good cheer: 13 ways the Archdiocese of Baltimore is spreading warmth in Christmas 2013
Monsignor Slade Catholic School community rallies around student, family
PrevNext